Mother of all bombs: How powerful is US mega-weapon? 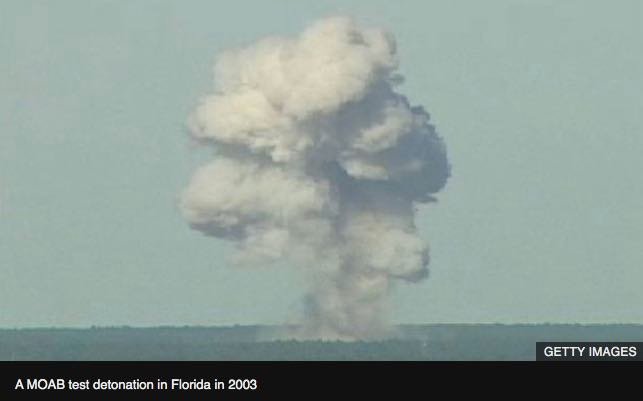 So… no need for nuclear weapons!

The US military has just dropped its largest conventional (that is non-nuclear) bomb for the first time in combat, on Afghanistan’s eastern province of Nangarhar.

The GBU-43/B Massive Ordnance Air Blast Bomb (MOAB) – or, in military speak, Mother of All Bombs – was launched on Thursday.

The target was said to be a network of tunnels operated by the so-called Islamic State in Achin district.

As a non-nuclear weapon, use of the MOAB does not necessarily require approval by the US president.

The MOAB falls from the aircraft on a pallet, which is then tugged aside by a parachute allowing the weapon to glide down, stabilised and directed by four grid-like fins.

Its principal effect is a massive blast wave – said to stretch for a mile in every direction – created by 18,000lb of TNT.

The bomb’s thin aluminium casing was designed specifically to maximise the blast radius.

The bomb is designed to damage underground facilities and tunnels.

And yet, the MOAB is not the US military’s heaviest non-nuclear bomb.

That distinction belongs to the Massive Ordnance Penetrator, or MOP, a bunker-buster which weighs a colossal 30,000lb.

Russia has developed its own massive conventional bomb, nicknamed the Father Of All Bombs. The FOAB is a kind of fuel-air bomb, technically known as a thermobaric weapon.

Thermobaric bombs generally detonate in two stages: a small blast creates a cloud of explosive material which is then ignited, generating a devastating pressure wave.

A significant part of the effect of weapons like the MOAB is said to be psychological – to instil terror by the massive force of the blast.

Its development followed the use of similar weapons including the BLU-82 Daisy Cutter, a 15,000lb bomb designed in part to flatten a section of forest to carve out a helicopter landing pad.

The MOAB was developed by the Alabama-based aeronautics company Dynetics.