Ex-Guantanamo detainee Omar Khadr to get apology and pay 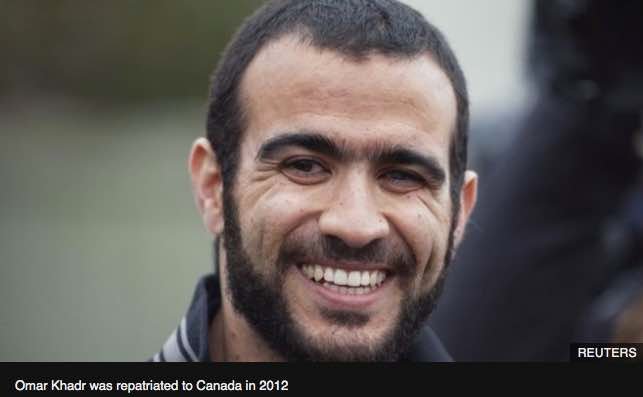 A wonderful example: all tortured prisoners should sue the US, Canadian, and any other government contributing to their suffering and not respecting international law forbidding any form of torture.

Canada will issue an apology and compensation to former Guantanamo Bay detainee Omar Khadr for abuses he suffered while in prison, reports say.

Canadian-born Khadr, 30, was convicted in 2010 by a US military commission of killing a US soldier in Afghanistan.

In 2010, Canada’s Supreme Court ruled that he was interrogated under « oppressive circumstances. » He will reportedly be paid $8m (£6m).

The announcement of an official apology and compensation would be made next week, the reports added.

When asked about the case, Canadian Prime Minister Justin Trudeau, would not confirm any details.

Khadr, who was the youngest prisoner ever detained at the naval base in Cuba, became a cause celebre for Guantanamo Bay opponents and his case received international attention.

He was convicted of five crimes, including throwing a grenade that killed Army Sgt Christopher Speer in 2002. He was shot and captured during the fire fight in Afghanistan.

Khadr said his confessions to US officials were made under duress

He was repatriated in 2012 after agreeing to a plea deal to leave Guantanamo and serve the majority of his eight-year sentence in Canada.

In 2010, Canada’s Supreme Court concluded that Canada’s conduct in connection with Khadr’s case « did not conform to the principles of fundamental justice » and violated his constitutional rights.

The court noted he was subjected to sleep deprivation to make him « less resistant to interrogation ».

In 2015, a judge released Khadr on bail despite a last minute appeal by the then federal Conservative government to keep him in jail. He said then that he would prove to Canadians that he was a « good person ».

Khadr is the son of an alleged close associate of Osama Bin Laden and was drawn into militant circles when he was young. He spent his youth in Canada and Pakistan, where his father had interests.

His case has long polarised public opinion in Canada. His defenders describe him as a child soldier while others argue he was a radicalised fighter at the time of his capture.