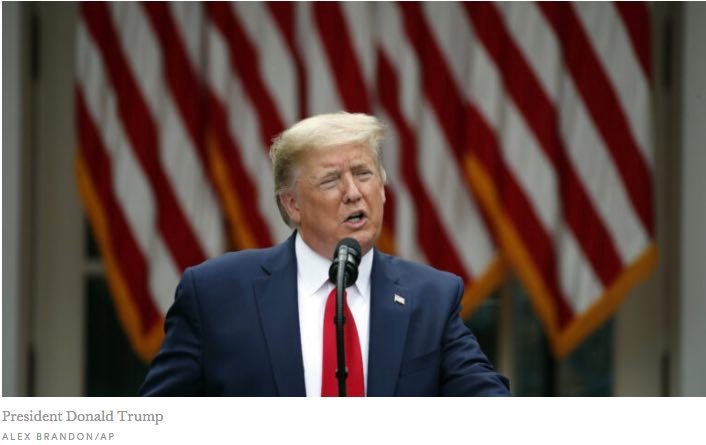 President Trump said Friday the U.S. would halt its funding of the World Health Organization and pull out of the agency, accusing it of protecting China as the coronavirus pandemic took off. The move has alarmed health experts, who say the decision will undermine efforts to improve the health of people around the world.

In an address in the Rose Garden, Trump said the WHO had not made reforms that he said would have helped the global health agency stop the coronavirus from spreading around the world.

“We will be today terminating our relationship with the World Health Organization and redirecting those funds to other worldwide and deserving urgent global public health needs,” Trump said. “The world needs answers from China on the virus.”

It’s not immediately clear whether the president can fully withdraw U.S. funding for the WHO without an act of Congress, which typically controls all federal government spending. Democratic lawmakers have argued that doing so would be illegal, and House Speaker Nancy Pelosi threatened last month that such a move would be “swiftly challenged.”

The United States has provided roughly 15% of the WHO’s total funding over its current two-year budget period. A WHO spokesperson declined to comment Friday.

Trump’s announcement came the same day that the U.S. mission in Geneva met with Tedros Adhanom Ghebreyesus, the WHO director-general, about the country’s demands for WHO improvements. A source familiar with the meeting described it as constructive.

Some congressional Republicans have echoed Trump’s attacks on the agency, but in a statement Friday, Sen. Lamar Alexander, the chair of the Senate’s health committee, said he disagreed with Trump.

“Certainly there needs to be a good, hard look at mistakes the World Health Organization might have made in connection with coronavirus, but the time to do that is after the crisis has been dealt with, not in the middle of it,” said Alexander (R-Tenn.). “Withdrawing U.S. membership could, among other things, interfere with clinical trials that are essential to the development of vaccines, which citizens of the United States as well as others in the world need. And withdrawing could make it harder to work with other countries to stop viruses before they get to the United States.”

Trump: U.S. will terminate relationship with the World Health Organization in wake of Covid-19 pandemic