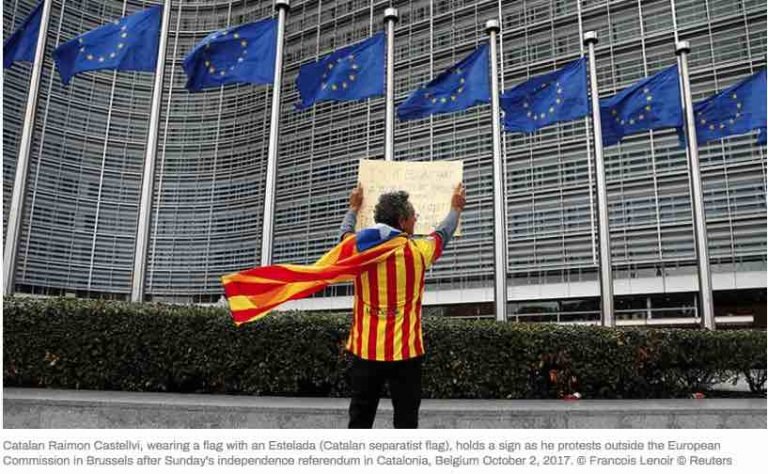 It is a little bit late for the EU to remember international law on its western border when it was ignoring it on its eastern border, Marko Gasic, an international affairs commentator, told RT.

Catalonia’s leader has vowed to declare the region’s independence from Spain in the coming days.

Carles Puigdemont, the breakaway region’s president, said he does not plan to delay the declaration of independence for much longer and is ready to “act at the end of this week or the beginning of next,” he said in an interview with the BBC on Tuesday.

Spanish authorities continue to say they see the vote on Sunday as illegal and unconstitutional, while the EU gave its backing to the Spanish prime minister to resolve the crisis.

The move has been criticized by the president of Serbia, who has accused the EU of double standards regarding Kosovo.

Serbian President Aleksandar Vucic did not mince his words when he voiced a rather obvious question: « How did you proclaim the secession of Kosovo to be legal, even without a referendum, and how did 22 European Union countries legalize this secession, while destroying European law and the foundations of European law, on which the European policy and EU policy are based? »

Marko Gasic, an international affairs commentator, said Kosovo’s vote was recognized because it’s not part of the union.

He added, « this is clearly a schizophrenic position the EU has. »

Gasic provided some historical insight into the EU’s past stance on Kosovo secession.

Gasic expressed doubt that the EU has learned any lessons from its past experience in Yugoslavia since « it never admitted any mistakes » there.

« I believe the EU would behave in exactly the same way again because [Kosovo] is not an area that belongs to the club, the rich man’s club, as Spain does, » he added.