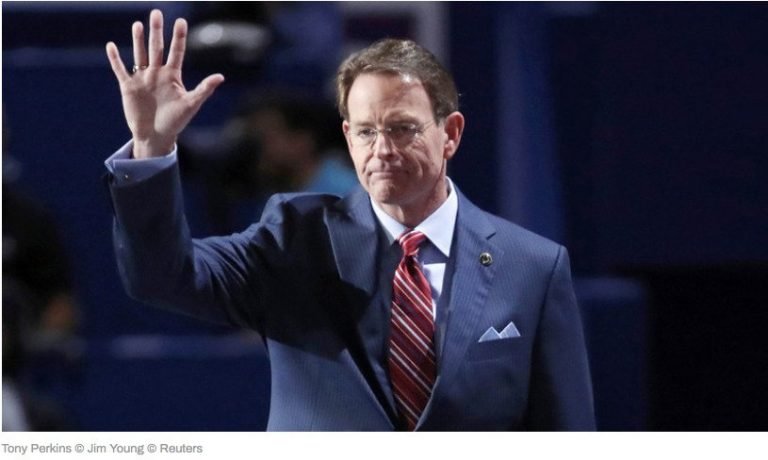 Tony Perkins, a conservative broadcaster infamous calling natural disasters God’s punishment for gay people, has had to flee his Louisiana home amid flooding of “biblical proportions.”

„Thousands of people in Louisiana have lost everything they own and need our help now,” Brad Kieserman, the Red Cross’ vice president of disaster services operations and logistics, said in a statement about the flooding in and around Baton Rouge.

One of those people is Perkins, the Louisianian told Ken Klukowski, the guest host of his ‘Washington Watch’ radio show.

“Down in Louisiana they’re just being devastated by the impact of this storm, and it is tremendously ironic that one of the individuals impacted is actually the normal host of this show, Mr. Tony Perkins himself, whose home has been overrun by this natural disaster,” Klukowski said, introducing the president of the Family Research Council on the organization’s radio show.

Southeastern Louisiana was struck by a „1,000-year” rain ‒ record two-day rainfall that ended early Saturday morning ‒ triggering flooding that has damaged at least 40,000 homes and forced the rescues of more than 30,000 people since Friday. At least 13 people have died in the flooding.

Perkins, his wife Lawana, and their five children had to escape from their flooded home on Saturday “by canoe. We had about 10 feet of water at the end of our driveway.”

The family was then turned away from a shelter, but was eventually taken in for the night by a former member of their church “in God’s provision.” Perkins is currently serving as the interim pastor at Greenwell Springs Baptist Church, which was damaged in the flooding that has affected 80 percent of the congregation.

„We’re gonna look for what God’s gonna do in this,” he told Klukowski. „I’m asking those questions and I’m going to see.”

In a 2015 interview, Perkins agreed with the assertion of his guest, Messianic Jewish pastor Jonathan Cahn, that Hurricane Joaquin – which had devastated many Caribbean islands – was a sign that God was angry about the legalization of gay marriage and abortion.

„God is trying to send us a message,” Perkins told Cahn.

It was a claim he did not repeat on his radio show while discussing the flooding of “biblical proportions” in Louisiana.

The Family Research Council is classified as an anti-LGBT hate group by the Southern Poverty Law Center.