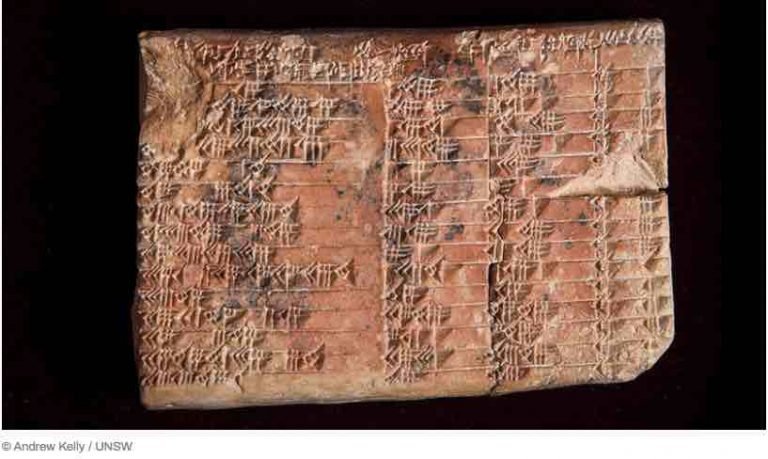 A real pity to see western people, and especially stupid Americans, looking down at Iraq as a primitive country, while it’s one of the oldest advanced civilization. When the European ancestors of the American white people were still living in wooden huts and hunting with arrows, all advanced sciences were already developed in what is today Iraq; and 1000 years before Greece. A great humility lesson for western imperialist white supremacists…

The mystery of a numerically-coded Babylonian tablet has been cracked, with scientists in Australia revealing the 3,700-year-old clay artifact is the world’s oldest trigonometry table.

Normally held at Columbia University in New York, the tablet’s uses are detailed in a Historia Mathematica journal study.

The clay relic was most likely used in the construction of buildings to determine the ratio of angles.

“Our research reveals that Plimpton 322 describes the shapes of right-angle triangles using a novel kind of trigonometry based on ratios, not angles and circles. It is a fascinating mathematical work that demonstrates undoubted genius,” Dr Mansfield said.

Wildberger said the Babylonian relic was created before the studies of Greek astronomer Hipparchus, who is regarded as the founding father of trigonometry.

“Plimpton 322 predates Hipparchus by more than 1,000 years,” Wildberger said. “It opens up new possibilities not just for modern mathematics research, but also for mathematics education.

“A treasure-trove of Babylonian tablets exist, but only a fraction of them have been studied yet. The mathematical world is only waking up to the fact that this ancient but very sophisticated mathematical culture has much to teach us.”