It only takes a zeptosecond: Scientists measure smallest fragment of time 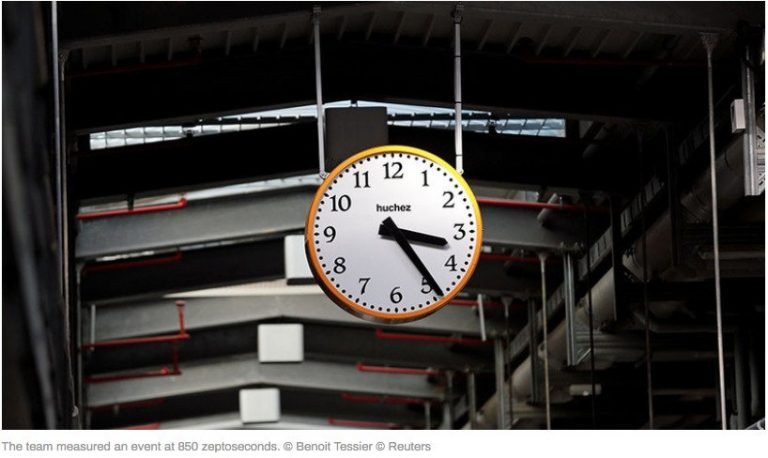 Another stupid thinking of scientists after the “multiverse” idiocy: there is no smallest fragment of time as time is also infinite, and so can be divided infinitely, like space!

News has never happened so fast: Now scientists have now measured the smallest fragment of time ever observed. A zeptosecond (one trillionth of a billionth of a second) was used to measure an electron escaping its atom for the first time.

A team from the Max Planck Institute of Quantum Optics in Garching, Germany, were studying Albert Einstein’s photoelectric effect when they made the quicker than lightning-fast discovery, New Scientist reports.

Firing ultraviolet laser pulses at a helium atom they excited its electrons. A near-infrared laser pulse was also fired at the atom, detecting an escaping electron as soon as it left the atom.

“We can confirm this by doing statistics for a lot of measurements and calculating the statistical standard error of the mean, which in our case is 850 zeptoseconds.” physicist Marcus Ossiander, who was involved in the study, said of the quickest event ever measured.

Before Ossiander and his team’s discovery scientists were only able to observe what happened after an electron leaves an atom, never the preceding event as it happened at an unmeasurable rate of time.

“Using this information, we can measure the time it takes the electron to change its quantum state from the very constricted, bound state around the atom to the free state,” Ossiander said.

Martin Schultze, also involved in the study, said the discovery gave an important insight into the quantum behavior of atoms and electrons, hopefully allowing for future understanding of phenomena including superconductivity and quantum computing.

“Many things are rooted in the interactions of individual electrons, but we handle them as a collective thing. If you really want to develop a microscopic understanding of atoms, on the most basic level, you need to understand how electrons deal with each other.” he said.