The BRICS strikes back 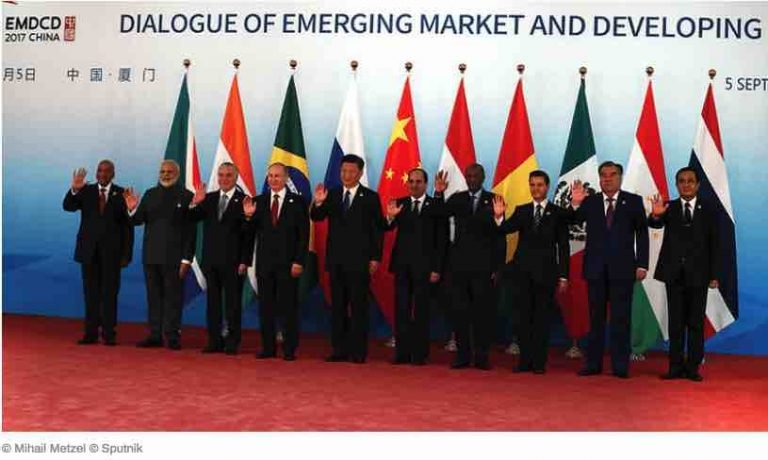 The wide-ranging Xiamen Declaration, issued in conjunction with the just wrapped-up annual BRICS summit, shows that Brazil, Russia, India, China and South Africa, although facing internal challenges of their own, may be about to step up their collective game, big time.

And they won’t be intimidated/derailed by the crumbling unipolar order.

Xiamen made it clear the BRICS are all-out engaged to “redress North-South development imbalances,” with Chinese President Xi Jinping emphasizing the necessity of a more just international order, echoing President Putin’s calls for a “fair multipolar world,” and “against protectionism and new barriers to global trade.”

Xi, the host at Xiamen, where he was once mayor, went out of his way to stress, “we five countries [should] play a more active part in global governance.”

One of the key planks of what is a concerted geopolitical/geoeconomic drive will start to be implemented via an upcoming BRICS-wide customs union. It’s all about connectivity – in trade, commerce, and finance. And that also dictates investment and business openings rolling in sync, as well as a sharper role for development funds and the BRICS’s own New Development Bank (NDB).

The dialogues, which will inevitably evolve into business and investment deals, are at the core of ‘BRICS Plus’; the overarching concept, proposed last March by Chinese Foreign Minister Wang Yi, for expanding South-South partnership/cooperation.

What this will mean, in the immediate future, is an even further, complex interpolation of BRICS Plus with the already converging New Silk Roads, a.k.a. Belt and Road Initiative (BRI); the Eurasia Economic Union (EAEU); and the Shanghai Cooperation Organization (SCO).

All these economic/political vectors are advancing in sync. The SCO may be essentially focused on security, countering jihadism or even solving border disputes, but it has also been developing the economic cooperation front. India and Pakistan have become SCO full members this year. Iran, Afghanistan and Turkey are observers, and will soon become full members. Egypt and post-war Syria want in. The SCO’s geopolitical reach is fast becoming pan-Eurasian.
And that’s reflected, for instance, in the Xiamen Declaration proposing an “Afghan-led and Afghan-owned” peace and national reconciliation process, “including the Moscow Format of consultations” and the “Heart of Asia-Istanbul process.”

This means, essentially, the BRICS supporting not a surge of Pentagon troops but an all-Asian (and not Western) Afghan peace process brokered by the SCO, of which Afghanistan is an observer and future full member.