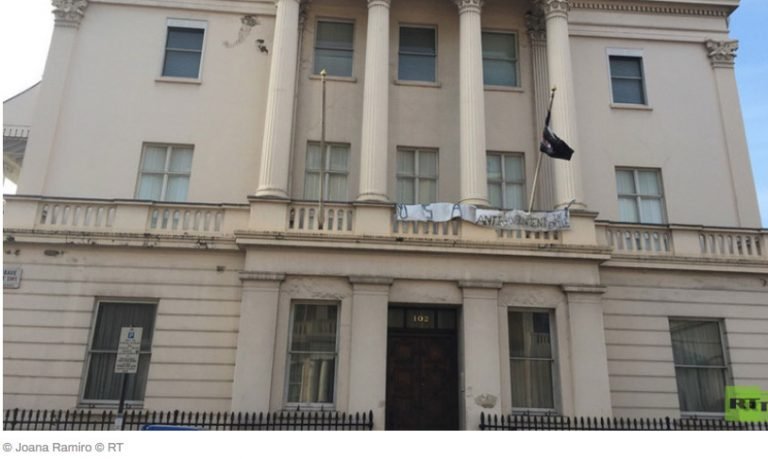 Absolutely wonderful! That should happen everywhere. It’s scandalous to see many huge buildings belonging to the 0.000 001% kept empty while there are so many homeless people dying of cold in the streets.

A group of anti-fascist anarchist squatters has claimed a £15 million (US$18.9 million) building in one of London’s most exclusive streets in a bid to highlight social inequality in the city.

“The Autonomous Nation of Anarchist Libertarians has returned to London for more hard-core penetration deep into Babylon,” the group said in an official statement posted on Facebook. “We have grand plans for bringing disruptive, satyrical [sic] chaos to the heart of the beast.

“Hopefully to raise awareness of the hidden consequences of humanity’s unrestrained rapacious nature. We simply cannot sustain this capitalistic greed-based way of living.

“Innocent people are dying every day for no reason other than our common ignorance. The solutions are in plain sight & easily accessible if only we overcame our primitive nature of caring only for those whom it is convenient to see as within our perceived ‘tribe’.”

It is believed the squat was established on Wednesday in Eaton Square, next door to a series of luxury homes. Local concierges looked apprehensively at the occupied building as RT tried to get in.

Squatters later told RT they had left the building on Friday morning to run errands, but would be returning at 5pm.

One of the doormen, who preferred to remain anonymous, told the Daily Mail bailiffs had come to the squat’s front door and tapped a notice.

“A little later one of [the squatters] came out a side window and took the notice off and went back inside,” he added.

The building, which shows signs of having been used as a commercial property before, has been lying empty since Goncharenko purchased it in 2014. Next to an antifascist anarchist flag, the occupiers have hung up a large banner from a balcony which reads “USA anti-government in exile.”

The same group was responsible for the occupation of a building by Trafalgar Square in 2015, as well as the former headquarters of the Institute of Directors on Pall Mall. The locations earned the title of ‘London’s poshest squats’ in the press.

“We call ourselves Bourgeois Squatters,” a member called Dominic told the Daily Mail at the time. “We all have different views. Some are here to make a political point, but some are not.

“But the main point for us all is that there are million-, even billion-, pound properties standing empty and I think it is disgusting that these buildings are left empty when there is a housing crisis going on in London.”

Computer hacker Lauri Love is said to have stayed the night at the squat while awaiting extradition to the US, where he faces up to 99 years in prison.