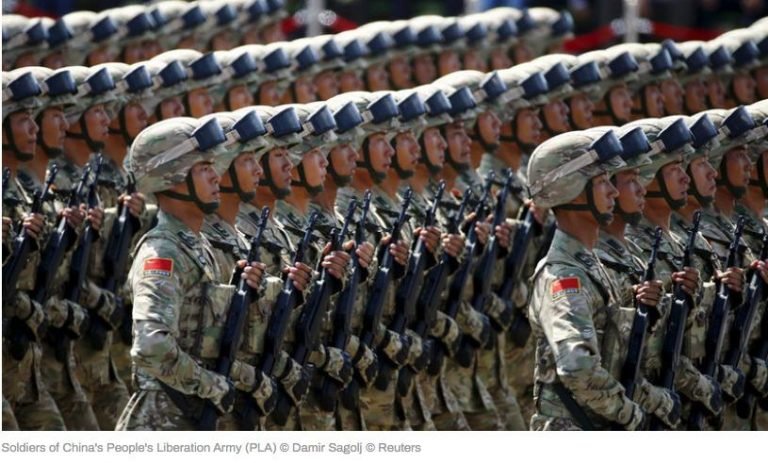 Great to see the cooperation between Russia and China to stop the US and NATO’s bullying of the world.

Beijing and Damascus have agreed that the Chinese military will provide humanitarian aid to Syria, a high-ranking People’s Liberation Army officer said, adding that the training of Syrian personnel by Chinese instructors has also been discussed.

During the negotiation, Guan noted China’s consistent diplomatic efforts to find a political solution to the Syrian crisis, adding that Beijing is now seeking closer military ties with Damascus.

“The Chinese and Syrian militaries traditionally have a friendly relationship, and the Chinese military is willing to keep strengthening exchanges and cooperation with the Syrian military,” he said.

Guan and al-Freij discussed the enhancement of training and “reached a consensus” on the Chinese military providing humanitarian aid to Syria, Xinhua reported, without providing further details.

According to the agency, Guam also met with a Russian general during his visit to the Syrian capital.

China has been operating in Syria alongside Russia and Iran in a “discreet manner” but now the time has come to “openly” step up anti-terrorist efforts, believes political analyst Roula Talj.

“We will see more involvement of China, of Iran and Russia. They will go [in] stronger after ISIS, especially after Russia-US talks. I do not think the US will have any chance to oppose the interference of these allies. The US president or any candidate will have to answer their own public[’s] opinion, so it is good for them that someone else is doing the dirty job,” Roula Talj told RT. “In the face of their own public[’s] opinion they have to be grateful that somebody else is cleaning the mess they had created, especially as ISIS is getting stronger every day inside of Europe. Of course, they are not extremely happy to see the BRICS countries taking over.”

Meanwhile political expert Qin Duo Xu does not foresee any “deep involvement” of the Chinese military in Syria, but says it could be a “significant” first step for China to “get involved in the Syrian situation.”

“There are chances that this cooperation will increase a lot,” he told RT. “At least China can provide more support or diplomatic cover in terms of cracking down [on] terrorists or some rebel groups that are really extremist in nature.”

It is in China’s strategic interests to get involved in the Syrian crisis and “play a larger role” in resolving it, independent China strategist, Andrew Leung said.

“This is really a breakthrough in China’s strategies in the Middle East. There appears to be more coordination with countries, like Russia,” Leung told RT. “China sees itself as one of the great powers and as befitting a state of great power there is the responsibility to maintain peace and stability in a very important region in the world…as far as the Middle East is concerned it means even more to China because it is a matter of energy security.”

Despite being a permanent UN Security Council member and relying on the Middle East for oil, China was previously reluctant to become involved in the Syrian conflict.

Beijing preferred to concentrate on domestic affairs and the territorial dispute with its neighbors in the South China Sea.

It praised Moscow’s anti-terrorism efforts in Syria as Russia staged a bombing campaign there in September 2015 to March 2016. Russia still has some of its forces in the country to provide humanitarian and military assistance to Syrian President Bashar Assad’s government.

Last year, there were reports that China was sending dozens of military advisers to Syria to help the country fight terrorists.

Syria has been engulfed in civil war since 2011, with the government fighting a number of rebel groups, in addition to terrorist groups such as Islamic State (IS, formerly ISIS/ISIL) and Al-Nusra Front.