‘It was an act of God’: Engineer says the crane which collapsed in Mecca killing 107 had been ‘installed in an extremely professional way’ 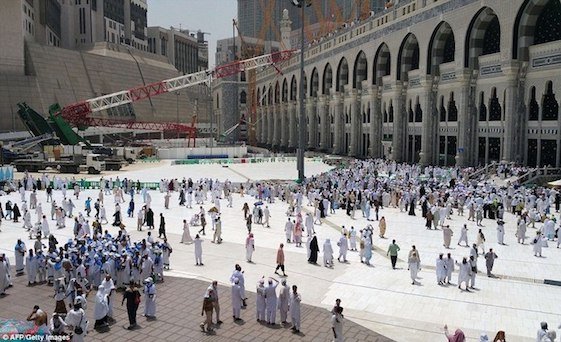 An engineer for the developer responsible for the construction at Mecca – where a crane toppled killing more than 100 people – has claimed the incident was an ‘act of God’.

The unnamed engineer for the Saudi Binladin Group – which was founded by the father of the late Al-Qaeda leader Osama Bin Laden – has insisted there was no technical problem.

His reasoning for the accident comes as Saudi authorities have vowed to investigate why the crane fell on Friday, killing 107 and injured hundreds more at the Islam holy site.

Yesterday the engineer stated the crane had been installed in ‘an extremely professional way’ and that it was simply ‘an act of God’.

‘We need to accept what happened,’ he said, at the same time calling for a thorough investigation.

Saudi Arabia’s King Salman has now vowed to find out what caused the crane collapse at Mecca’s Grand Mosque ahead of the annual hajj pilgrimage, although authorities have stated it was due to high winds during a thunderstorm.

The hajj, a pillar of the Muslim religion which last year drew about two million faithful, will take place despite the tragedy, Saudi authorities said as crowds returned to pray a day after the incident.

Hundreds of thousands of pilgrims had already arrived in Mecca when the massive red and white crane toppled over during a Friday thunderstorm.

‘We will investigate all the reasons and afterwards declare the results to the citizens,’ Salman said after visiting the site.

But there was little mourning among pilgrims, who snapped pictures of the collapsed metal and continued with their prayers and rituals.

‘I wish I had died in the accident, as it happened at a holy hour and in a holy place,’ Egyptian pilgrim Mohammed Ibrahim said.

Om Salma, a Moroccan pilgrim, said ‘our phones have not stopped ringing since yesterday with relatives calling to check on us’.

Indonesians and Indians were among those killed when the crane collapsed, while the injured included Malaysians, Egyptians, Iranians, Turks, Afghans and Pakistanis.