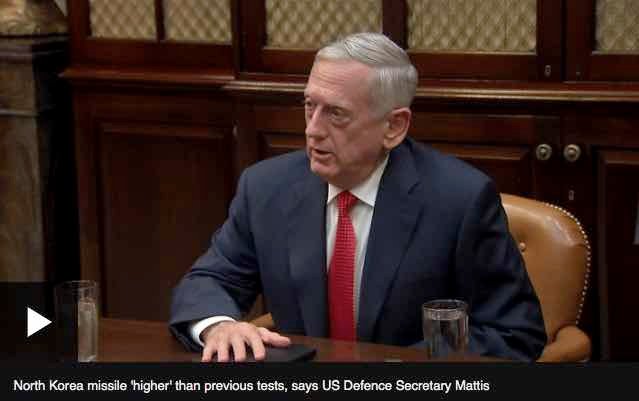 Lies, lies, lies! The real “global threat” is the US with bases all around the world and 10 000 nuclear bombs.

Second lie: “it fell in the Sea of Japan” … while the real historic Korean name is “Sea of the East”, used both by North and South Korea. It was renamed the Sea of Japan after the colonial invasion of Korea by the Japanese empire. It’s quite funny to see the US, which fought the Japanese empire, using for this sea the very name which was imposed by Japanese invaders they defeated.

North Korea has fired its highest-ever intercontinental ballistic missile and poses a worldwide threat, US Secretary of Defence James Mattis has said.

The missile, launched early on Wednesday, landed in Japanese waters.

It was the latest in a series of weapons tests that has raised tensions. Pyongyang last launched a ballistic missile in September.

It also conducted its sixth nuclear test that month. North Korea has continued to develop its nuclear and missile programme despite global condemnation and sanctions.

The UN Security Council is due to convene an emergency session to discuss the latest test.

What damage could North Korea do?
Are missiles a risk to planes?
Can the world live with a nuclear North Korea?
North Korea’s missile programme
Mr Mattis said the missile launch “went higher, frankly, than any previous shots they have taken”.

The North was building “ballistic missiles that threaten everywhere in the world”, he added.

US President Donald Trump was briefed while the missile was still in the air, the White House said. Afterwards he said: “We will take care of it.”

The US-based Union of Concerned Scientists said the missile could have travelled more than 13,000km on a standard trajectory, thus reaching “any part of the continental United States”.

But it added it seemed likely that the missile had a very light mock warhead – which meant that it could be incapable of carrying a nuclear warhead, which is much heavier, for that distance.