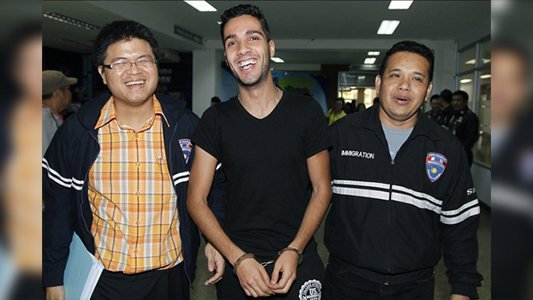 This guy is Hamza Brndelladj. He hacked 217 banks and more 400 million dollars. He donated everything in Africa and Palestine. He was sentenced for 15 years of jail. his smile though, says it all.

After a three-year chase, Bendelladj was arrested by Thai police while making a stopover in Bangkok in transit between Malaysia and Egypt. He did not resist arrest. He said goodbye to his family as he was arrested and his wife and daughter continued their journey to Egypt without him. He earned the nickname “Smiling Hacker” due to the smile on his face during his media presentation on all the photos taken after his arrest even when handcuffed. According to Thai police, Bendelladj was in the top 10 most wanted by the FBI.