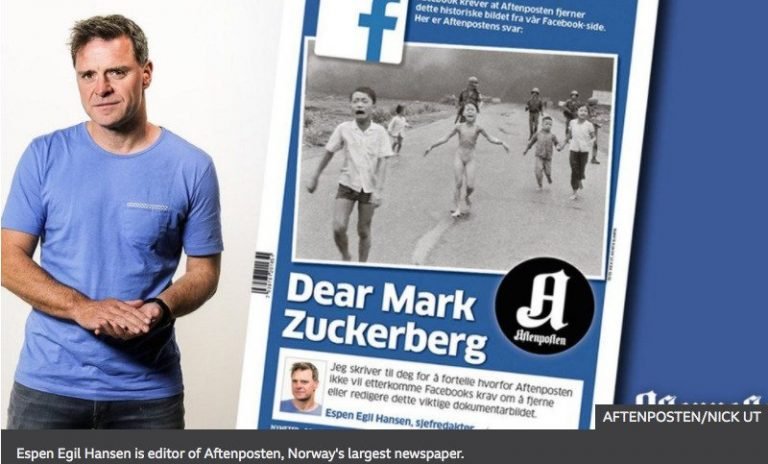 That’s not enough, they should allow topless girls like many countries where it’s legal including New York City, or will they decide to show only women with burkas?

Facebook says it will allow an iconic photograph of a girl fleeing a Napalm attack taken during the Vietnam war in 1972 to be used on its platform.

It had previously removed the image, posted by a Norwegian author, on the grounds that it contained nudity.

The move sparked a debate about Facebook’s role as an editor.

The editor of Norway’s largest newspaper had written an open letter to Facebook’s chief Mark Zuckerberg calling the ban «an abuse of power».

The tech giant said it had «listened to the community» and acknowledged the «global importance» of the photo.

«Because of its status as an iconic image of historical importance, the value of permitting sharing outweighs the value of protecting the community by removal, so we have decided to reinstate the image on Facebook where we are aware it has been removed,» it said in a statement.

«It will take some time to adjust these systems but the photo should be available for sharing in the coming days.

«We are always looking to improve our policies to make sure they both promote free expression and keep our community safe.»

The Norwegian prime minister — who had earlier posted a copy of the photo on Facebook herself only to see it removed — welcomed the U-turn.

Tom Egeland, the author whose Facebook account had been suspended over the affair, also expressed his pleasure.

«This does not alter at all the difficult issues that involve Facebook and the Norwegian media. But tonight I’m just happy.»

Tech or media?
But Espen Egil Hansen — the editor of Aftenposten, who had brought the issue to prominence — said he still had concerns.

«When it comes to this photo specifically I would say that it was a sensible decision by Facebook. That’s what we editors have to do sometimes — realise that we made a mistake and change our minds,» he wrote in Norwegian on the newspaper’s site.

«But the main point of my article, and the point that I have asked Mark Zuckerberg to engage in, is the debate about Facebook’s power that results from so much information going through its channels. And that still stands.

«He should begin to take part in this discussion, for there are no simple solutions. Facebook must recognise that it has become an information filter — and that raises problematic issues.»

Last month, Mr Zuckerberg told an Italian audience that he did not want his firm to become a news editor.

«No, we are a tech company, not a media company,» he said.

«The world needs news companies, but also technology platforms, like what we do, and we take our role in this very seriously.»