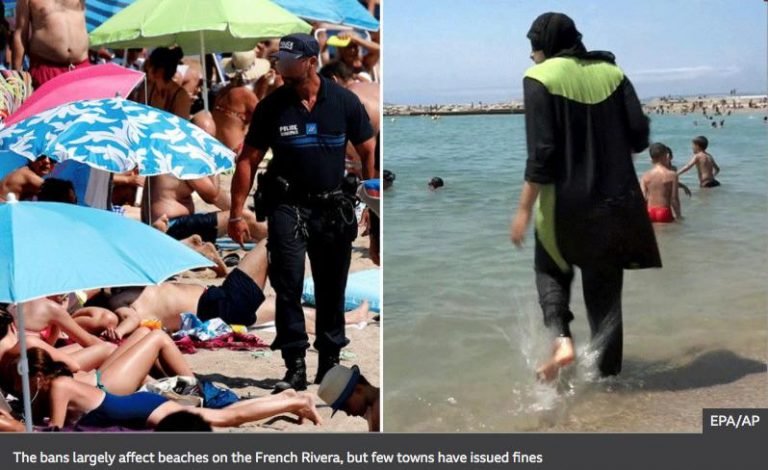 And if the court doesn’t cancel it, they must go to the European Court of Human Rights. Freedom!

France’s highest administrative court is being asked to overturn beach bans imposed by 26 towns on women in full-body swimsuits known as «burkinis».

A human rights group and an anti-Islamophobia association argue the bans are in breach of French law.

Mayors, particularly on the Riviera, say the bans are protecting public order and rules on secularism.

Opinion polls suggest most French people back the bans but Muslims warn they are being targeted unfairly.

According to an Ifop survey, 64% of French people are in favour of the bans while another 30% are indifferent.

The bans appeared to have split senior members of the French government.

Prime Minister Manuel Valls waded into the debate on Thursday, backing the mayors who had made public order decisions in the aftermath of the jihadist attack on Nice last month. The burkini represented the «enslavement of women», he added.

Education Minister Najat Vallaud-Belkacem said that while she disapproved of the burkini as a feminist, she saw the bans as unwelcome and objected to the idea that the clothing a woman wore on a beach could have any link to terrorism or jihadist group Islamic State.

The controversy has intensified in France after pictures of police appearing to enforce the ban prompted widespread anger. Some of the women pictured in Nice and Cannes were not wearing burkinis.

Siam, 34, a mother from Toulouse, was fined €11 (£9; $12), although she insists she was not wearing a burkini at the time but leggings, a jacket and a headscarf.

«The policeman told me I had to wear correct clothing and wear the hijab as a headband. But I left the beach and kept my hijab on,» she told the BBC World Service. «I felt like a stranger in my own country. Some people came to comfort me but others insulted me.»

French daily Liberation said on Thursday that the local laws were «stupid» and a gift to Islamist propaganda.

Anouar Kbibech, president of the French Council of the Muslim Faith (CFCM), said he was «concerned over the direction the public debate is taking», citing the «growing fear of stigmatisation of Muslims in France».

Most of the beaches where bans have been imposed are on the Riviera in south-east France.

However, few are thought to have issued fines other than the authorities at Cannes and Nice, where more than 20 fines have been handed out.

They failed to persuade a court in Nice this week to overturn a ban at Villeneuve-Loubet west of Nice and have taken their case to France’s highest administrative court, the Council of State (Conseil d’Etat). A ruling is expected on Friday afternoon.

In London, about 50 people gathered outside the French embassy to protest against the burkini ban.