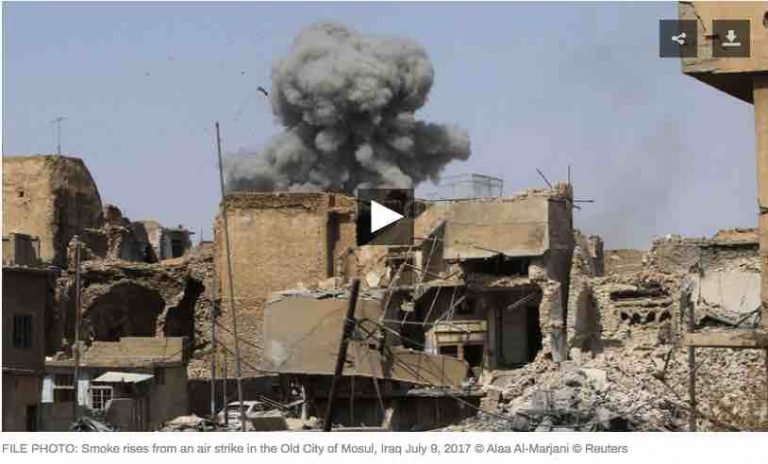 The US-led coalition fighting Islamic State (IS, formerly ISIS/ISIL) has confirmed another 61 “unintentional civilian deaths” caused by its strikes in Iraq and Syria, raising the number of civilians it has acknowledged killing since 2014 to at least 685.

The coalition said in a statement, released on Friday, that during the month of July, it had investigated 37 reports of civilian casualties. “[of these] 13 were accessed to be credible resulting in 61 unintentional civilian deaths.”

The coalition is currently investigating a total of 455 reports of civilian casualties caused by its artillery or air strikes, the statement said.

It has acknowledged at least 685 civilian deaths caused by its operations since August 2014.

«To date, based on information available, CJTF-OIR [Combined Joint Task Force – Operation Inherent Resolve] assesses that, it is more likely than not, at least 685 civilians have been unintentionally killed by Coalition strikes since the start of Operation Inherent Resolve,” the statement said, noting that the coalition takes all reports of civilian casualties “seriously and assesses all reports as thoroughly as possible.”

The deadliest incident was a March 14 strike near Mosul, in which the coalition attacked an Islamic State position where fighters were firing at coalition allies.

“During a strike on ISIS fighters engaging partner forces from a fighting position, it was assessed that 27 civilians in an adjacent structure were unintentionally killed,” the coalition said.

“Although we are unable to investigate all reports of possible civilian casualties using traditional investigative methods, such as interviewing witnesses and examining the site, the Coalition interviews pilots and other personnel involved in the targeting process, reviews strike and surveillance video if available, and analyzes information provided by government agencies, non-governmental reports, partner forces, and traditional and social media.”

Civilians are paying an “unacceptable” price in the siege of the city of Raqqa, a top UN human rights official stressed on Thursday, adding that the US-led coalition may not be respecting the principles of international humanitarian law in its “intense” airstrikes.

Zeid Ra’ad al-Hussein, UN high commissioner for human rights, said his office had managed to verify reports of 151 civilian deaths from six aerial or ground operations over the course of August alone.

“Given the extremely high number of reports of civilian casualties this month and the intensity of the airstrikes on Raqqa, coupled with ISIL’s use of civilians as human shields, I am deeply concerned that civilians – who should be protected at all times – are paying an unacceptable price and that forces involved in battling ISIL are losing sight of the ultimate goal of this battle,” Zeid said in a statement.

The UN has expressed “deep concerns” over the mounting number of civilian casualties in Raqqa inflicted by US-led coalition airstrikes, condemning “any attack directed against civilians or civilian infrastructure.”

“Our humanitarian colleagues tell us they are deeply concerned by unconfirmed reports of a high number of civilians killed by airstrike in Raqqa city over the last 24 hours,” Stéphane Dujarric, the spokesman for the UN secretary-general, told reporters at a daily briefing at the end of last month.

“In recent days and weeks scores of civilians have reportedly been killed and injured in Raqqa due to airstrikes and shelling and up to 25,000 people remain trapped in the city,” Dujarric said.