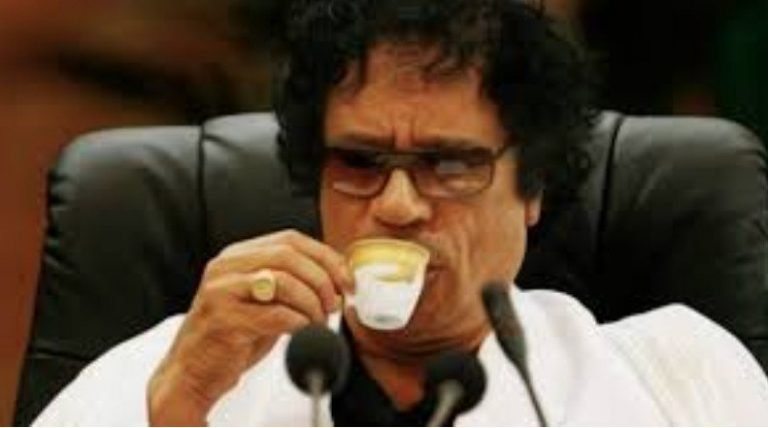 His son is ready to take the place.

Who actually benefits from American-led wars across the globe? The aftermath of American-led conflicts shows it is not the common people, though the military and politicians vow they are liberating and protecting them.

The Sunday Mail, Zimbabwe’s “leading family newspaper,” has published accounts of a number of Libyans who expressed regret over Muammar Gaddafi’s overthrow in 2011, despite the fact some of them even took up arms against him. As one said:

“‘I joined the revolution in the first days and fought against Gaddafi,’ former revolutionary fighter Mohammed, 31, said from the southern city of Murzuq. ‘Before 2011, I hated Gaddafi more than anyone. But now, life is much, much harder, and I have become his biggest fan.’”

In 2011, we were told Gaddafi was going to commit grave bloodshed against his own people and that as a result, the international community needed to intervene to protect Libyan civilians. This proved to be false, according to an analysis of statistics obtained by Human Rights Watch. Further, an investigation conducted by Amnesty International also found a number of claims against Gaddafi were fabricated, as noted by the Independent:

“Nato leaders, opposition groups and the media have produced a stream of stories since the start of the insurrection on 15 February, claiming the Gaddafi regime has ordered mass rapes, used foreign mercenaries and employed helicopters against civilian protesters.

“An investigation by Amnesty International has failed to find evidence for these human rights violations and in many cases has discredited or cast doubt on them. It also found indications that on several occasions the rebels in Benghazi appeared to have knowingly made false claims or manufactured evidence.”

The so-called “no-fly zone” the U.N. Security Council Resolution authorized did not allow for regime change, something NATO representatives further promised their Eastern counterparts would not happen. The resolution only authorized the coalition forces to take all necessary measures to protect civilians under threat of attack in the country, including Benghazi, while excluding a foreign occupation force of any form on any part of Libyan territory. The resolution requested that the coalition immediately inform the Secretary-General of such measures.

What this “no-fly zone” actually entailed was a full-scale assault on Gaddafi’s forces to ensure none of his aircraft could fly within his own country’s airspace. It also meant anything capable of taking out a coalition warplane would also have to be destroyed.

All of these NATO bombs were allegedly intended to protect civilians.

Furthermore, a Libyan rebel commander went on record to admit his fighters included al-Qaeda-linked jihadists who had fought against U.S. troops in Iraq. These fighters, known at the time as al-Qaeda in Iraq, are now referred to as ISIS. It should be no surprise that ISIS now has a stronghold in Libya following the fall of Gaddafi.

Before the NATO onslaught, Libya had the highest standard of living of any country in Africa. This meant the people enjoyed state-sponsored healthcare, high literacy rates, and other benefits that come with living in a relatively prosperous society. In 2015 alone, the country fell 27 places on the U.N. Human Development Index ratings. According to UNICEF, there are now two million Libyan children out of school.

Consumers of corporate media might also be surprised to learn Libya had an inclusive and progressive democracy where decision-making was conducted at the local level. It was not the dictatorship Sacha Baron Cohen incorrectly portrayed in his film, The Dictator.

Regardless of one’s views of Gaddafi, the former Libyan leader was able to provide stability and good governance to the people of Libya. It may be the case that he was responsible for torturing scores of dissidents, but one should bear in mind that the United Kingdom would actually send those dissidents to Gaddafi, knowing full well they would be tortured.

Making this corruption even juicier, former French leader Nicolas Sarkozy, the man who essentially had Gaddafi assassinated, was actually under investigation for having accepted 50 million euros from Gaddafi for his election campaign.

Are we supposed to trust these corrupt politicians to protect the interests of civilians?

To the warmongers within the American political establishment, the destruction of the Libyan way of life was nothing but a (hilarious) game.

“We thought things would be better after the revolution, but they just keep getting worse and worse.

“Far more people have been killed since 2011 than during the revolution or under 42 years of Gaddafi’s rule combined.

“We never had these problems under Gaddafi.

“There was always money and electricity and, although people did not have large salaries, everything was cheap, so life was simple.

“Some of my friends have even taken the boat to Europe with the migrants because they feel there is no future for them here.

“I would like to escape this mess and study abroad but I have been waiting a year for a new passport and, even when I do get one, it will be hard to get a visa because all the embassies left in 2014.