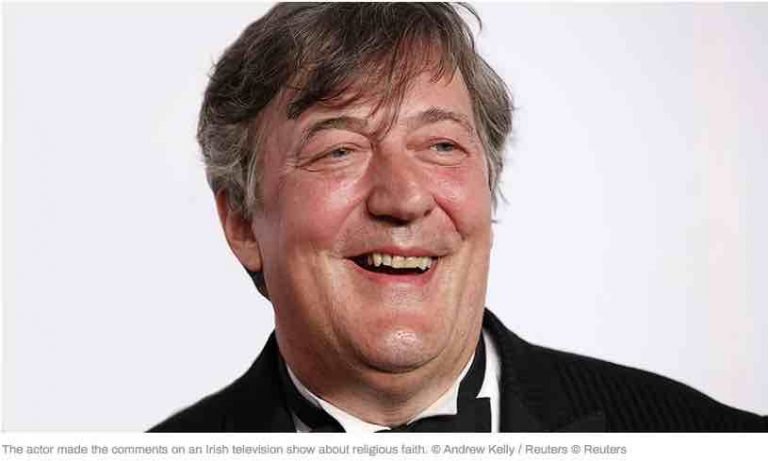 This medieval law should be canceled. Plain and simple!

Irish police investigating actor Stephen Fry for potential blasphemy have dropped the case citing the lack of “a substantial number of outraged people.”

A man from rural Ireland reported the alleged crime back in 2015, and told the Irish Independent he, “…believed that the comments made by Fry on Ireland’s national broadcaster RTÉ were criminal blasphemy and that [he] was doing [his] civic duty by reporting a crime.”

“Why should I respect a capricious, mean-minded, stupid god who creates a world which is so full of injustice and pain?” Fry said in 2015.

An investigation began after the plaintiff wrote to the Irish police Commissioner Noirín O’Sullivan in December 2016, after a complaint to Irish police was not acted upon.

Former justice minister Dermot Ahern had previously stated that the law was constructed to make it “virtually impossible” to prove intent to hurt or to offend members of a religion.

“The blasphemy law was carefully crafted in such a way that we would fulfill the constitutional requirement, but on the other hand to make the offence as narrow as impossible… in other words, to make it virtually impossible for a prosecution to be taken,” the former minister told a local radio station.

The offence of blasphemous libel has existed in Ireland’s constitution since 1937 and would require a referendum to remove which Ahern described as too costly during his time as justice minister.

Instead the law was reformed in 2009 making the “publication or utterance of blasphemous matter” against any religion an offence.

It is virtually impossible to prosecute somebody in Ireland for blasphemy but the police are obliged to investigate under the constitution if a member of the public complains of ‘blasphemous libel.’

People convicted of blasphemy under Irish law can face a fine of up to €25,000.

Ireland’s Health Minister Simon Harris described the blasphemy law as “silly” and “embarrassing,” and has urged the government to call a referendum to decide the issue once and for all.

“It needs to be changed. I’m very pleased that the Government wishes to see a referendum in relation to this issue. It obviously does require constitutional change,” he said.