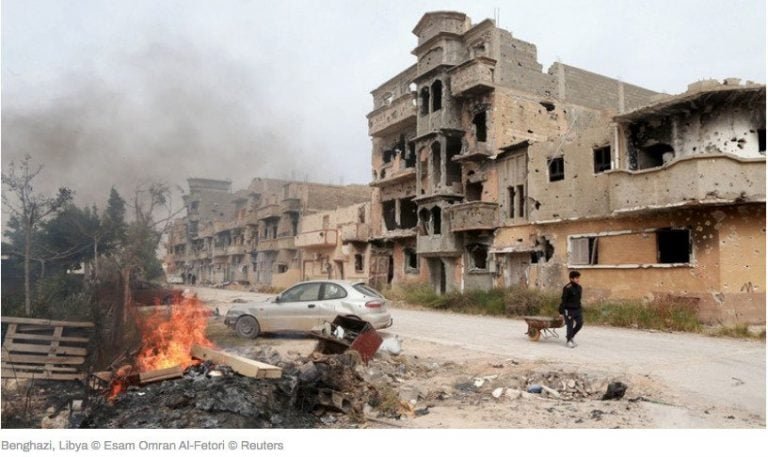 Let’s hope his son will replace him continuing his wonderful policies, especially replacing the dollar by a gold based money, cancelling the “debt “, uniting African nations, expelling all US or European militaries and nationalizing without any damage money all companies belonging to them.

Libyans who mounted a revolution against Colonel Muammar Gaddafi now miss the stability provided by the old order because of the savage violence into which the country has descended, it is reported.

The testimony has emerged in a number of on-the-ground interviews carried out by the Daily Mail and comes only days after a Commons Defence Committee report placed blame for the country’s collapse and the emergence of Islamic State (IS, formerly ISIS/ISIL) firmly on the shoulders of David Cameron.

The former PM, who stepped down as an MP hours before the report was published, faces calls from fellow Tories to appear before the committee to account for the “ill-conceived” 2011 war, which even US President Barack Obama is alleged to have privately written off as Cameron’s personal “sh*t-show.”

Five years on from the conflict, Libyans are lamenting the violence, blackouts, shortages, refugee crisis and general descent into chaos of the formerly stable North African state.

“I joined the revolution in the first days and fought against Gaddafi,” a former anti-regime fighter named Mohammed told the Mail.

“Before 2011 I hated Gaddafi more than anyone. But now, life is much, much harder, and I have become his biggest fan,” the 31-year-old said.

An oil worker named Haroun said getting rid of Gaddafi “was clearly a mistake because we weren’t ready for democracy and we needed support from the international community, which just wasn’t there.”

Political activist Fadiel told the paper that although “it should be better than Gaddafi’s time now,” all that remained is “chaos and everyone fighting each other, it’s just a mess.”

Entrepreneur Nuri, from Tripoli, said: “It’s not so much about being pro-Gaddafi because he was a crazy leader who was actually quite embarrassing internationally. It’s just that people’s lives are so difficult now compared to under Gaddafi.”

Medical student Salem, 26, also from Tripoli, said hopes had been quickly crushed in the wake of the US-led war in which the UK played a major part.

“Far more people have been killed since 2011 than during the revolution or under 42 years of Gaddafi’s rule combined. We never had these problems under Gaddafi.

“There was always money and electricity and, although people did not have large salaries, everything was cheap, so life was simple,” he added.

Cameron did not give evidence in the committee report and has so far not responded to calls to give testimony on what the investigation has branded an “ill-conceived” operation.