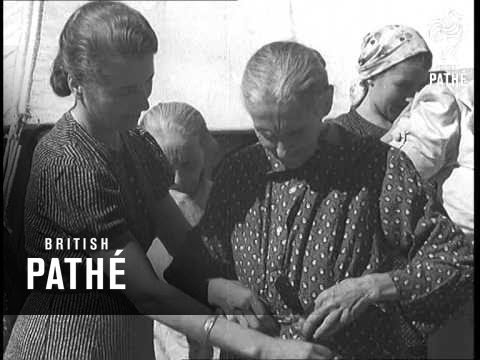 Islamic Iran showed the world how to treat Christian and Jewish refugees.

Various shots of small crowd of Polish refugees on their way from Poland to Persia – they are walking through the desert. One family is picked out, the Kowalski family – mother, father and four children. They carry bundles which are their only belongings.

Camp Commandant speaks to the refugees and tells of the need for able people in the fight. The father, eldest son and daughter pick up their bags and leave Mrs Kowalski – father and son kiss the children and then kiss mother’s hand. Corps of women soldiers marching, amongst the ranks is the eldest daughter of the Kowalski family. The son and the father in the ranks of the army. Various shots showing Mrs Kowalski busy at work in the refugee camp. The two youngest children are seen at open-air school.

Montage of close up shots of the Kowalskis walking, arriving to Persia and walking in their brigades.

Amendment July 2016: A visitor to the site has informed us about the following history of Polish refugees in Persia: Thousands of Poles were deported to the USSR in 1940-1, after the Red Army invaded Poland. Following the outbreak of the Soviet-German war in June 1941, talks began between Stalin and the Polish government in exile. These concluded with the signing of the Sikorski-Mayski agreement (30 July 1941). In August 1941, Soviet authorities issued an “amnesty” decree for Polish citizens.

The Polish-Soviet agreement enabled the Polish Embassy to resume operations, and gave Polish people an opportunity to leave their places of exile. Moreover, it created a legal basis for the formation of the Polish Army in the USSR, under the command of Gen. Wladyslaw Anders (hence the name Anders’ Army). The army was a component of the Polish Armed Forces, subordinate to the government in London. The Polish Army (app. 76,000 people) was evacuated to Iran in 1942, along with around 40,000 Polish civilians. It was then that settlements were created for the civilians in Africa, Iran, India, Palestine, Mexico and New Zealand.