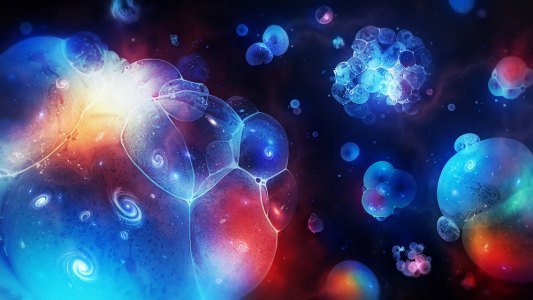 It’s surprising how scientists who are supposed to be highly educated people don’t even know the meaning of words. Universe means all which exists. That means ALL. But they are so attached to the limit their primitive science created, like the big bang or the size of the universe, that they cannot accept that the universe is infinite.  And they will for sure, replicate the same mistake by proposing a size and age for the “ multiverse”. “ Modern” scientists replicate the same mistake as those who, in ancient times, invented the word “atom”, which means “ which cannot be divided”.  And nowadays scientists are proving how stupid they are about linguistic by continuing to use the word “ atom” while they perfectly know that it’s composed of smaller parts. They should create some ethical committee of linguists before giving names to their discoveries.

To account for our incredible luck, leading cosmologists like Alan Guth and Stephen Hawking envision our universe as one of countless bubbles in an eternally frothing sea. This infinite “multiverse” would contain universes with constants tuned to any and all possible values, including some outliers, like ours, that have just the right properties to support life. In this scenario, our good luck is inevitable: A peculiar, life-friendly bubble is all we could expect to observe.