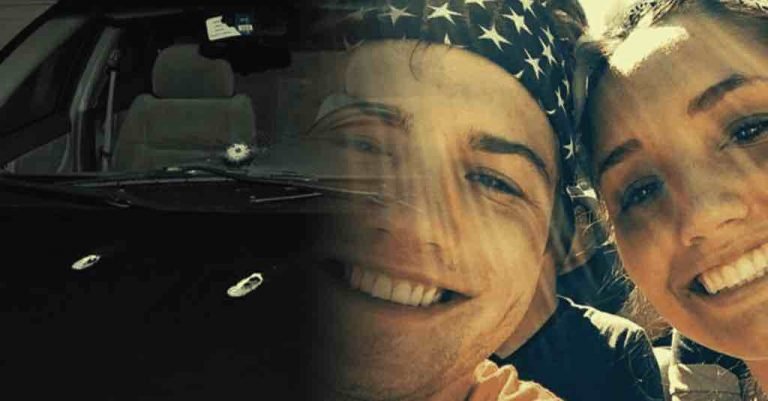 The USA is a barbarian country!

A police officer fired seven shots at a couple because they were in his driveway.

Two teenagers who were on their way to a party on New Year’s Day 2014 did not realize that they would find themselves running for their lives for a simple mistake.

It was supposed to be a night of fun and celebration for Luke Woodworth, 19, and his 17-year-old girlfriend Samantha Willis when they lost their way.

Thinking they had finally arrived at the right place they pulled in to a driveway. However, as soon as they knocked on the door they realized it was still not at the correct address so they walked back to their car.

Michael Krebs had spotted the couple on his property and apparently it put him in a foul mood.

Both were still in the driveway sitting in their car looking at directions when the angry man approached them.

When Woodworth looked up he saw Krebs pointing a gun at him as he shouted: “give me your ID”.

The ticked-off resident did not feel the need to mention that he was a police officer.

Alarmed by this warped situation the teenagers thought they were going to get mugged or shot, so he reversed his car and back out of the driveway as fast as he could.

It is then that Krebs fired seven shots towards them.

Two of these entered the vehicle narrowly missing the couple; the remaining five damaged the car.

As if this was not enough when Woodworth and Willis went to report the incident to the police, the former was arrested for criminal recklessness – a charge that was later dismissed.

The young couple sued the city of Indianapolis for the officer’s callous attitude soon after the incident.

Krebs is no longer employed as a cop.

Last month the couple reached a settlement with the city for a whopping $370,000

It is indeed unfortunate that the former police officer’s foolhardiness ended up costing Indianapolis a substantial amount of money; however, incidents of police brutality and use of excessive force continue to rise across the country.

Strange as it may seem, it is becoming a common trend for police officers to use a weapon to threaten people who end up at the wrong location.

Earlier this month, an off-duty New Jersey state trooper opened fire on three young men who had the wrong address. They too were taken into custody by the police to be released nine hours later.