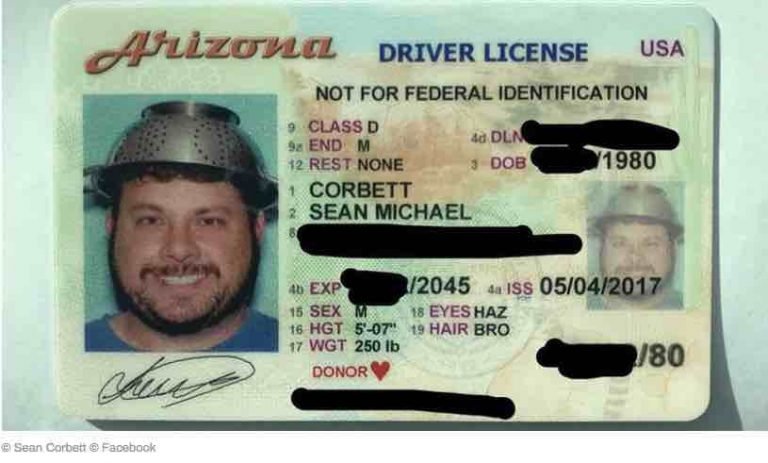 Excellent! If Jews can wear kippa everybody should be allowed to wear their religious hat… Even spaghetti Monster worshipers…

Religious struggle comes in many forms. For one Arizona man it’s all about winning the right to wear a colander on his head in his driver’s license photo.

Sean Corbett is a pastafarian, meaning he’s a member of the Church of the Flying Spaghetti Monster, and has been fighting for years to be allowed to wear his ‘religious’ headgear.

He eventually succeeded, but it might not last for long, as the state of Arizona is threatening to void his license. Most states do not permit the wearing of headgear in a driver’s license photo, though exceptions are made for religious reasons.

RT.com caught up with Corbett to find out about his fight and why he chose to become a pastafarian.

“This has been going on for about two and a half years now. I discovered the religion about three years ago and did a lot of research about it,” Corbett said.

“I agreed with its values and essential moral compass and in this day and age, where it seems like religion has been used as a weapon against other people, I wanted to find something that was peaceful, fun, and lighthearted such as myself.”

Upon studying the religion, Corbett discovered that pastafarians place spaghetti colanders on their heads and he decided to update his government ID with the ‘headgear.’

Government agencies initially refused, but this didn’t deter Corbett who, after a couple of years, managed to convince one of the managers at a branch of the Department of Motor Vehicles (DMV) to allow him to use the photo.

“She warned me that they would issue me a temporary [license] but there was no guarantee that I would receive an actual license in the mail if it didn’t pass the screening classes. So I was willing to take the concession and move forward for the sake of actually getting further than I had ever gone before,” Corbett said, adding that the received the license almost a month later and was “really ecstatic about it.”

The state has since said it will void Corbett’s license. However, he has a plan.

“Right now there is a stop on it, so it’s currently under investigation, so I have no idea which way this is going to go. However, if they decide to revoke the license then they will put themselves in a position where they’re open to a lawsuit.”

“You simply just can’t assume my level of belief. So are they questioning the validity of the religion or are they questioning my belief? It’s really not their place to assume or even investigate, in my opinion. I am more than happy to go on the record officially and state that I am a true believer of the pastafarian religion.”

Pastafarianism was initially set up in 2005 to mock the decision of Kansas authorities to introduce a new subject called “intelligent design” into public schools. The subject was to teach about the creator of the universe and was viewed as an alternative to the teaching of evolution.

Pastafarianism is based on the belief that the world was created by the deity, the Flying Spaghetti Monster. They worship pirates who are thought of as being the original Pastafarians. They also think that heaven has a Beer Volcano and a Stripper Factory. Many do not take Pastafarianism seriously, viewing it as “parody” of real faith.