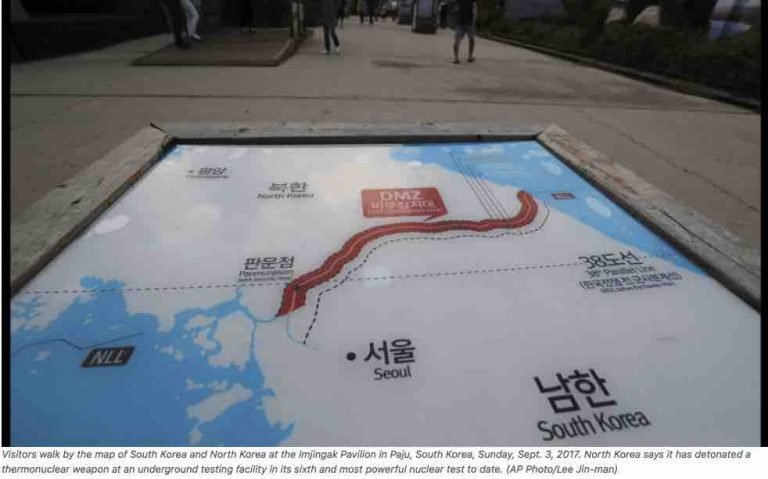 Mainstream media are so funny as well as US politicians: “This is yet another flagrant violation of multiple U.N. Security Council Resolutions, including UNSCR 2321 adopted in November 2016″, said NATO secretary-general Jens Stoltenberg of Norway… The truth is that North Korea violated seven UN resolutions… while Israel violated 225!!! But of course, nobody cares about Israel’s disrespect for UN resolutions. And the dozen of atomic bombs that North Korea is the focus while Israel has more than 200 and doesn’t even allow inspection by the UN non-proliferation treaty committee…. double standard?

American Ambassador to the United Nations Nikki Haley led a group of allied countries calling for a meeting of the UN Security Council Monday morning on the threat pose by North Korea after the country’s sixth nuclear test Saturday.

Haley, who said at the end of July she was “done talking about North Korea,” said the U.S., United Kingdom, France, Japan, and South Korea have all called for the meeting.

“We along w/Japan, France, the UK and S.Korea have called for an emergency Security Council meeting on N.Korea in the open tomorrow at 10am,” Haley tweeted.

It’s another call from the UN to act after North Korea’s test, said to be of a hydrogen bomb.

The leaders of the United Nations and the NATO military alliance condemned North Korea’s weekend nuclear test as a violation of international resolutions.

“This is yet another flagrant violation of multiple U.N. Security Council Resolutions, including UNSCR 2321 adopted in November 2016,” said NATO secretary general Jens Stoltenberg of Norway.

“The regime must immediately cease all existing nuclear and ballistic missile activities in a complete, verifiable, and irreversible manner, and re-engage in dialogue with the international community,” he said in a statement.

“The Secretary-General condemns the underground nuclear test announced by the Democratic People’s Republic of Korea (DPRK),” Dujarric wrote in a press release.

“This act is yet another serious breach of the DPRK’s international obligations and undermines international non-proliferation and disarmament efforts. This act is also profoundly destabilizing for regional security,” Dujarric wrote.

“The DPRK is the only country that continues to break the norm against nuclear test explosions,” the U.N. statement added.

Outside of an Episcopal church near the White House, Trump told reporters “we’ll see” in response to a shouted question about whether he would attack North Korea.

In an afternoon tweet, Trump suggested he was considering “in addition to other options, stopping all trade with any country doing business with North Korea.”

Secretary of State Rex Tillerson called his South Korean counterpart and other officials in the region to discuss the nuclear test, the nation’s sixth since 2006.