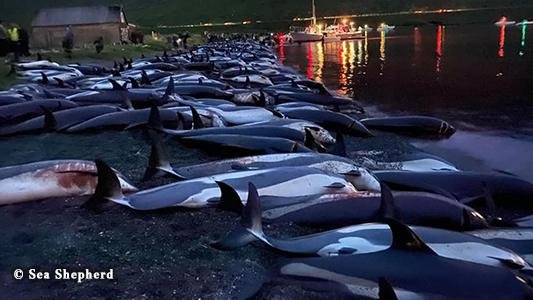 The Association of the millions of fish slaughtered every day by dolphins welcomes this reduction in the number of their predators.

The prime minister of the Faroe Islands said the government will evaluate regulations around catching white-sided dolphins following public outcry after nearly 1,500 were killed in a recent hunt.

“We take this matter very seriously,” Prime Minister Bárður á Steig Nielsen said in a statement on Thursday. „Although these hunts are considered sustainable, we will be looking closely at the dolphin hunts, and what part they should play in Faroese society. The government has decided to start an evaluation of the regulations on the catching of Atlantic white-sided dolphins.”

Last week, almost 1,500 white-side dolphins were killed during a hunt in the Faroe Islands as part of a long tradition of dolphin hunting, known as the grindadráp. The practice is subject to regulatory oversight, but the size of the recent haul sparked outrage and surprise among some.

RAEL’S COMMENT:  Those who „discovered” America only discovered that they didn’t know it existed….