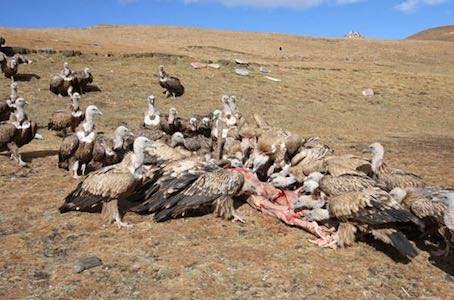 That’s one of the ways I would like my body to be disposed of after death.

Sky burial is a funeral practice in which a human corpse is placed on a mountaintop to decompose while exposed to the elements or to be eaten by scavenging animals, especially carrion birds. It is a specific type of the general practice of excarnation.

It is practiced in the Chinese provinces and autonomous regions of Tibet, Qinghai, Sichuan and Inner Mongolia, as well as in Mongolia, Bhutan and parts of India such as Sikkim and Zanskar. The locations of preparation and sky burial are understood in the Vajrayana Buddhist traditions as charnel grounds.

Comparable practices are part of Zoroastrian burial practices where deceased are exposed to the elements and birds of prey on stone structures called Dakhma. Few such places remain operational today due to religious marginalisation, urbanisation and the decimation of vulture populations.