‘Britain’s deployment is not to be provocative,’ says defence sec as UK sends aircraft carrier and other warships towards China 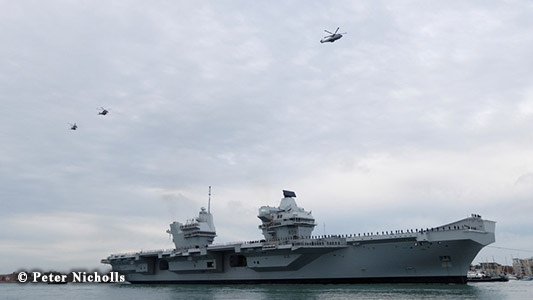 London has defended the UK’s decision to send a strike group, including its new £3 billion aircraft carrier, to the East Asia to visit allies and take part in exercises, claiming it is not being “provocative” towards China.
Speaking on Monday, Defence Secretary Ben Wallace told Sky News the deployment of HMS Queen Elizabeth, on its first operational deployment, would be positive for diplomacy and would not provoke conflict.

“When our carrier strike group sets sail next month, it will be flying the flag for Global Britain, projecting our influence, signalling our power, engaging with our friends and reaffirming our commitment to addressing the security challenges of today and tomorrow,” he stated.

Questioned as to whether it was wise to be sending a vessel towards China at this time, Wallace said HMS Queen Elizabeth’s deployment in May was not “provocative”, but sought to show Britain was ready to “play an active role in shaping the international system of the 21st century”.