The birth of a Eurasian century: Russia and China do Pipelineistan 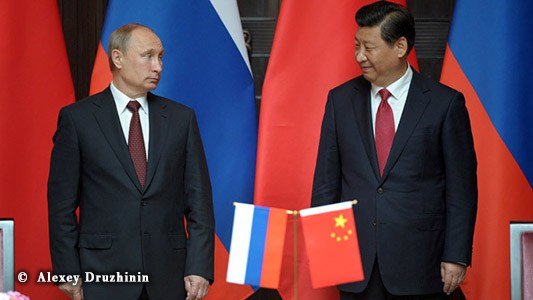 In fact, despite the colonialist naming of Europe and Asia as 2 different Continents, Europe and Asia are only one Continent which should be called Eurasia, or if the non colonialist spelling was in traditional alphabetic order should be called Asieurope…. why the name should be started with Europe first? And also Asia has a lot more population than tiny Europe. So except white racist domination there is no reason to place Europe before Asia in the name.

A specter is haunting Washington, an unnerving vision of a Sino-Russian alliance wedded to an expansive symbiosis of trade and commerce across much of the Eurasian land mass – at the expense of the United States.

And no wonder Washington is anxious. That alliance is already a done deal in a variety of ways: through the BRICS group of emerging powers (Brazil, Russia, India, China, and South Africa); at the Shanghai Cooperation Organization, the Asian counterweight to NATO; inside the G20; and via the 120-member-nation Non-Aligned Movement (NAM). Trade and commerce are just part of the future bargain. Synergies in the development of new military technologies beckon as well. After Russia’s Star Wars-style, ultra-sophisticated S-500 air defense anti-missile system comes online in 2018, Beijing is sure to want a version of it. Meanwhile, Russia is about to sell dozens of state-of-the-art Sukhoi Su-35 jet fighters to the Chinese as Beijing and Moscow move to seal an aviation-industrial partnership.