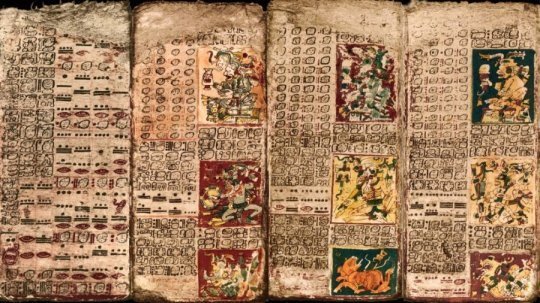 And their brilliant civilization was destroyed by another genocide committed by European colonialists (Spanish) and their very primitive barbaric civilization but with guns, using powder stolen from another advanced civilization: the Chinese.

For more than 120 years the Venus Table of the Dresden Codex — an ancient Mayan book containing astronomical data — has been of great interest to scholars around the world. The accuracy of its observations, especially the calculation of a kind of ‘leap year’ in the Mayan Calendar, was deemed an impressive curiosity used primarily for astrology.

But UC Santa Barbara’s Gerardo Aldana, a professor of anthropology and of Chicana and Chicano studies, believes the Venus Table has been misunderstood and vastly underappreciated. In a new journal article, Aldana makes the case that the Venus Table represents a remarkable innovation in mathematics and astronomy — and a distinctly Mayan accomplishment. “That’s why I’m calling it ‘discovering discovery,’ ” he explained, “because it’s not just their discovery, it’s all the blinders that we have, that we’ve constructed and put in place that prevent us from seeing that this was their own actual scientific discovery made by Mayan people at a Mayan city.”

Aldana’s paper, “Discovering Discovery: Chich’en Itza, the Dresden Codex Venus Table and 10th Century Mayan Astronomical Innovation,” in the Journal of Astronomy in Culture, blends the study of Mayan hieroglyphics (epigraphy), archaeology and astronomy to present a new interpretation of the Venus Table, which tracks the observable phases of the second planet from the Sun. Using this multidisciplinary approach, he said, a new reading of the table demonstrates that the mathematical correction of their “Venus calendar” — a sophisticated innovation — was likely developed at the city of Chich’en Itza during the Terminal Classic period (AD 800-1000). What’s more, the calculations may have been done under the patronage of K’ak’ U Pakal K’awiil, one of the city’s most prominent historical figures.

“This is the part that I find to be most rewarding, that when we get in here, we’re looking at the work of an individual Mayan, and we could call him or her a scientist, an astronomer,” Aldana said. “This person, who’s witnessing events at this one city during this very specific period of time, created, through their own creativity, this mathematical innovation.”

Scholars have long known that the Preface to the Venus Table, Page 24 of the Dresden Codex, contained what Aldana called a “mathematical subtlety” in its hieroglyphic text. They even knew what it was for: to serve as a correction for Venus’s irregular cycle, which is 583.92 days. “So that means if you do anything on a calendar that’s based on days as a basic unit, there is going to be an error that accrues,” Aldana explained. It’s the same principle used for Leap Years in the Gregorian calendar. Scholars figured out the math for the Venus Table’s leap in the 1930s, Aldana said, “but the question is, what does it mean? Did they discover it way back in the 1st century BC? Did they discover it in the 16th? When did they discover it and what did it mean to them? And that’s where I come in.”

Unraveling the mystery demanded Aldana employ a unique set of skills. The first involved epigraphy, and it led to an important development: In poring over the Table’s hieroglyphics, he came to realize that a key verb, k’al, had a different meaning than traditionally interpreted. Used throughout the Table, k’al means “to enclose” and, in Aldana’s reading, had a historical and cosmological purpose.

That breakthrough led him to question the assumptions of what the Mayan scribe who authored the text was doing in the Table. Archaeologists and other scholars could see its observations of Venus were accurate, but insisted it was based in numerology. “They [the Maya] knew it was wrong, but the numerology was more important. And that’s what scholars have been saying for the last 70 years,” Aldana said.

“So what I’m saying is, let’s step back and make a different assumption,” he continued. “Let’s assume that they had historical records and they were keeping historical records of astronomical events and they were consulting them in the future — exactly what the Greeks did and the Egyptians and everybody else. That’s what they did. They kept these over a long period of time and then they found patterns within them. The history of Western astronomy is based entirely on this premise.”

To test his new assumption, Aldana turned to another Mayan archaeological site, Copán in Honduras. The former city-state has its own record of Venus, which matched as a historical record the observations in the Dresden Codex. “Now we’re just saying, let’s take these as historical records rather than numerology,” he said. “And when you do that, when you see it as historical record, it changes the interpretation.”

Putting the pieces together

The final piece of the puzzle was what Aldana, whose undergraduate degree was in mechanical engineering, calls “the machinery,” or how the pieces fit together. Scholars know the Mayans had accurate observations of Venus, and Aldana could see that they were historical, not numerological. The question was, Why? One hint lay more than 500 years in the future: Nicolaus Copernicus.

The great Polish astronomer stumbled into the heliocentric universe while trying to figure out the predictions for future dates of Easter, a challenging feat that requires good mathematical models. That’s what Aldana saw in the Venus Table. “They’re using Venus not just to strictly chart when it was going to appear, but they were using it for their ritual cycles,” he explained. “They had ritual activities when the whole city would come together and they would do certain events based on the observation of Venus. And that has to have a degree of accuracy, but it doesn’t have to have overwhelming accuracy. When you change that perspective of, ‘What are you putting these cycles together for?’ that’s the third component.”

Putting those pieces together, Aldana found there was a unique period of time during the occupation of Chichen’Itza when an ancient astronomer in the temple that was used to observe Venus would have seen the progressions of the planet and discovered it was a viable way to correct the calendar and to set their ritual events.

“If you say it’s just numerology that this date corresponds to; it’s not based on anything you can see. And if you say, ‘We’re just going to manipulate them [the corrections written] until they give us the most accurate trajectory,’ you’re not confining that whole thing in any historical time,” he said. “If, on the other hand, you say, ‘This is based on a historical record,’ that’s going to nail down the range of possibilities. And if you say that they were correcting it for a certain kind of purpose, then all of a sudden you have a very small window of when this discovery could have occurred.”

By reinterpreting the work, Aldana said it puts the Venus Table into cultural context. It was an achievement of Mayan science, and not a numerological oddity. We might never know exactly who made that discovery, he noted, but recasting it as a historical work of science returns it to the Mayans.