Putin, Xi message to Trump: US unipolar world is over 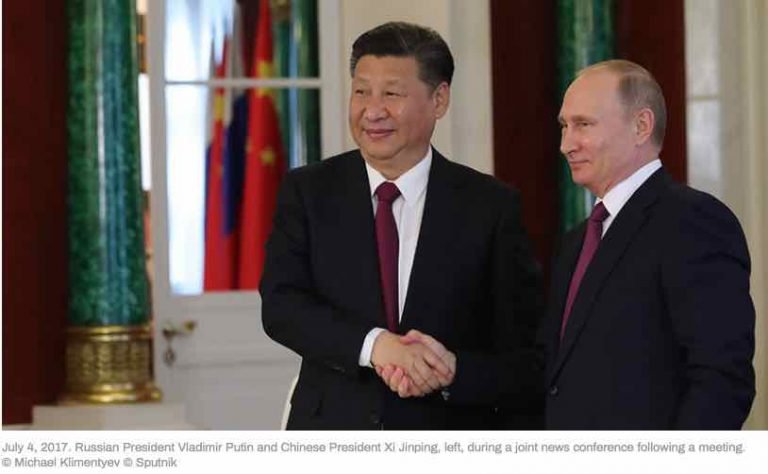 The US’ strategy has been to isolate Russia internationally. Evidently, it is Washington that is becoming more isolated on the global stage. This week in the run-up to the G20 summit in Germany, the reverse in fortunes could not be more glaring.

While North Korea was openly defying Washington with a breakthrough ballistic missile test, and US President Donald Trump was embroiled in his usual juvenile tweeting antics, Russia and China’s leaders were proudly consolidating their strategic alliance for a new multipolar global order.

Western media won’t acknowledge as much, but the meeting this week in Moscow between Putin and Xi Jinping was of historical importance. We are witnessing a global transition in power. And for the common good.

Russian President Vladimir Putin and his Chinese counterpart Xi Jinping bond through an apparent deep sense of mutual respect and wisdom about the political challenges facing today’s world. The two leaders have met on more than 20 occasions over the past four years. President Xi referred to Russia as China’s foremost ally and said that in a topsy-turvy world the friendship between the two was a source of countervailing stability.

On the breaking news of North Korea’s successful test launch of its first Intercontinental Ballistic Missile (ICBM), both Putin and Xi called for calm restraint. By contrast, US President Trump took to Twitter to taunt Kim Jong-Un. “Does this guy not have anything better to do with his life?” said Trump in words that could apply more pertinently to the American president.

Then the US and its South Korea ally also launched their ballistic missiles in a military drill aimed as a show of strength to Pyongyang. Kim Jung-Un responded that the ICBM was a “gift for the American bastards” on their Fourth of July Independence Day holiday and that there would more such gifts on the way.

Rather than escalating tensions, Putin and Xi put forward the eminently reasonable proposal that North Korea should freeze its missile tests and the US should likewise halt its military exercises on the Korean peninsula. All sides must convene in negotiations with a commitment to non-violence and without preconditions to strive for a comprehensive settlement to the decades-old dispute.

The contrast in Putin and Xi’s dignified, intelligent response with that of Trump’s petulance is clear proof of Russia and China showing real global leadership, whereas the Americans are just part of the problem.

But the Korean drama was only one illustration this week of how American ambitions of unipolar dominance have become redundant.

The G20 summit prelude of Putin hosting Xi in Moscow was followed by the Chinese president making a state visit to Germany on Wednesday two days before the gathering in Hamburg. Xi and German Chancellor Angela Merkel reportedly signed new trade deals between the world’s two leading export economies.

“Relations between China and Germany are at their historic best,”said Michael Clauss, Germany’s ambassador to Beijing. “The economic and political dynamic from a German perspective is moving toward the east.”

Of significance too was news this week the European Union is preparing to finalize a major trade pact with Japan.

Evidently, Japan, despite being an ally of Washington, is reaching out to a multilateral solution as proposed by Moscow and Beijing.