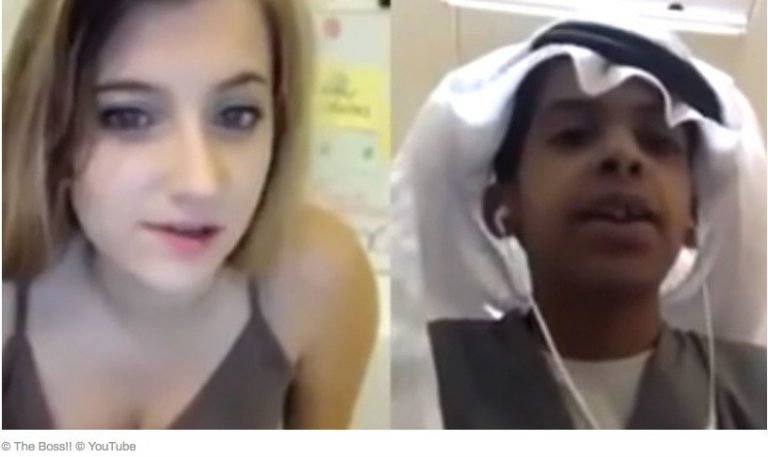 Saudi Arabia: the country presiding the Human Rights Committee for the United Nations …and no individual freedom at all!

Riyadh police arrested a Saudi teenager over video recordings of “enticing” online chats he held with an American video blogger. The conversations broadcast live by YouNow went viral and ended up with an audience of thousands of viewers.

The Saudi teenager known online as Abu Sin, a nickname which translates as “toothless”, hardly knew any English while the 21-year-old girl from California did not know any Arabic. However, that was no obstacle to the pair’s attempts at conversation.

Abu Sin’s “flirty” conversations with Christina Crockett, a YouNow video blogger, quickly gained an audience of thousands of amused internet users, who followed the boy’s frantic efforts to flirt in broken English for months. The recorded chats garnered hundreds of thousands more views after they were uploaded on YouTube.

Accused of “unethical behavior” and a breach of Sharia law, Abu Sin was arrested by Saudi authorities on Sunday.

“Abu Sin is 19-years-old and he was arrested for unethical behavior. His videos received many comments and many of the commenters of the general public demanded for him to be punished for his actions,” Riyadh Police spokesman Col. Fawaz Al-Mayman said, Saudi Gazette reported.

“The two of them composed enticing videos which received thousands of followers and viewers from all over the world within a short period of time. Most of the viewers were from the Arab world. Abu Sin, nicknamed for his projecting tooth, became famous and received negative attention,” Al-Mayman said.

Abu Sin remained true to his online fame up to the very moment of his arrest, which ended up getting broadcast on YouNow as well. The video shows police vehicle pulling up behind Abu Sin’s car while the young man is chatting online. Abu Sin could be then seen walking out of his car shortly followed by his two friends.

Abu Sin’s case has been handed over to the Bureau of Investigation and Public Prosecution. The boy risks facing a one to three-year jail term, depending on the judge’s verdict, his lawyer said.

Police also urged the general public to report anything that might be related to the case in order to “maintain a safe and secure community”.

Abu Sin is not the first Saudi internet user to be arrested over “immoral” internet activity. In 2013 police arrested a young man for posting pictures of himself offering “free hugs” in Riyadh.