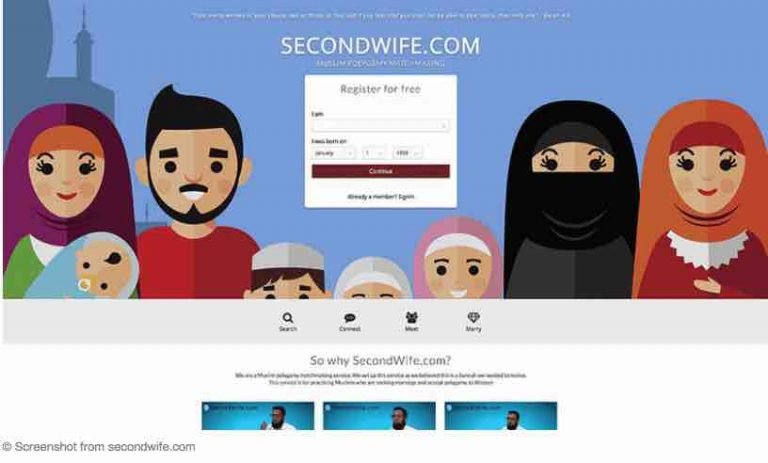 No need for marriage: polyamory is a much better option than a contract similar to what you sign for buying things. Human beings are not “things” and must stay free. And the free desire to live together cannot be attached to any contract. As long as living together gives you joy: stay together. If this joy disappears: say bye-bye! By the way, this sexist website provides multiple wives to one husband… but not multiple husbands to women: that’s not equality. Polyamory support „one woman living with many men“, as well as the opposite, as long as they wish and without any legalization. That’s freedom!

A website that helps Muslim men find “second wives” in Britain has more than 100,000 users registered, it has been revealed. The practice has been accused of opening women, often younger than their husbands, to physical abuse and even trafficking.

In the UK, polygamous marriages – in which a person has more than one spouse – are only recognized if they took place in countries where they are legal. British law, however, does not stop unregistered religious ceremonies from taking place.

Most Muslims in Britain do not practice polygamy, but some interpretations of the Quran say that a man may marry two, three, or four women, so long as he can deal justly and fairly with each of them.

SecondWife.com creator Azad Chaiwala says the website came from his “need” and “thinking there’ll be other people in my situation.”

“There are other deceiving ways of doing it – affairs, prostitution etc – those are not necessarily good for relationships,” he told the BBC.

“Here it is more honorable.”

Around 100,000 people have signed up – with men outnumbering women three to one, Chaiwala said. He denied the website was just for men, however.

“It takes two hands to clap; a guy can’t do it on his own. We’ve got so many successful marriages and so many women signed up themselves… they are opting to enter this kind of relationship.”

Yasmin Rehman of the Centre for Secular Space told the Daily Mail the website is “deeply dangerous” and called on politicians to step in.

“He’s promoting inequality and exploitation of women, and undermining what marriage is about. And he’s making money out of it.”

Rehman, who is a Muslim, added: “I think he’s flouting the law – anyone else would be subject to polygamy laws. It sits alongside websites like brides from abroad.

“I meet women who have been trafficked and prostituted. I’m fed up with this being accepted. There are Muslim women across the world fighting this, some at great risk to themselves.”

Gina Khan, of One Law For All, who herself has been part of a polygamous marriage, told the newspaper the website is “disgusting.”

“It is a medieval practice for Muslim men who want to commit adultery and they are using religion. It is an abusive practice,” Khan said.

“It’s impacting hundreds of British women and it’s being ignored by the state in this country. You can bet your life they are vulnerable women. There are a lot of women who I have come across who have no say in it.”

Chaiwala says his website does not break the law, and claims it “benefits women.”