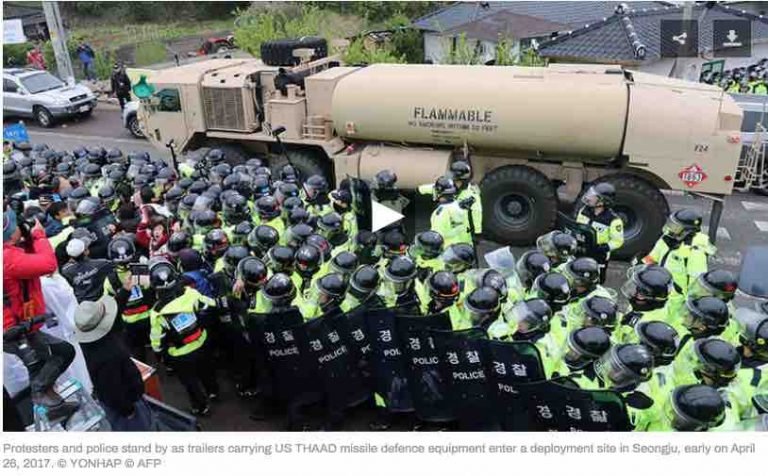 Like the Cuban crisis of 1962 when the US placed nuclear missiles in Turkey threatening Russia, and Russia then placed nuclear missiles in Cuba. We were very close to a nuclear war. Thanks to this riposte, all missiles were withdrawn and the threat of nuclear catastrophe disappeared. Sadly, the only solution to the encirclement of China and Russia by US bases and missiles is for Russia and China to place similar systems in Cuba and Venezuela. Then for sure, the coward US government will do the same as in 1962: withdraw all their threatening systems from areas close to these countries. Sadly, they only understand force and never use diplomacy.

Beijing has called for an immediate stop to the deployment of the US Terminal High Altitude Area Defense (THAAD) anti-missile system to South Korea and is ready to protect its interests, according to the Chinese Foreign Ministry.

Foreign Ministry spokesperson Geng Shuang voiced the government’s position against the move during a briefing on Tuesday.

„We oppose the deployment of the US missile system to South Korea and call on all parties to immediately stop this process. We are ready to take necessary measures to protect our interests,“ he said, adding that “China’s position on the THAAD issue has not changed.”

The spokesperson didn’t specify what protective measures China had in mind. However, responding to the THAAD installation, China announced on Thursday that it will stage live-fire exercises and test new weapons to protect its security.

Beijing has previously voiced concerns over the THAAD system and joint US-South Korean drills near the Korean Peninsula, consistently urging all the parties involved to find a peaceful solution to the volatile situation in the region.
Backed by Russia, it also proposed a halt to military drills in exchange for an end to Pyongyang’s missile and nuclear tests during a United Nations Security Council (UNSC) session held in New York on Friday.

Moscow considers the stationing of the THAAD system to be an “additional destabilizing factor for the region” amid alarmingly increasing tensions. It has called on Washington and Seoul to reconsider the decision.

Recently installed in South Korea, the THAAD system is aimed at detecting and shooting down missiles. It became operational on Monday and is able “to intercept North Korean missiles and defend the Republic of Korea [South Korea],“ according to US Forces Korea spokesman Col. Rob Manning.

The deployment of the US defense system triggered protests in South Korea, with citizens saying that it would only provoke an attack from their northern neighbor.

Seoul was also reportedly asked to pay for the US missile shield, as President Donald Trump called on South Korea to cough up for the “phenomenal billion-dollar system.” He received a firm rebuke in response, however.

The THAAD deployment comes as a part of other US steps to deter North Korea from testing nuclear and non-nuclear missiles. Pyongyang held two failed missiles tests in April, also threating to sink US warships and submarines in South Korean waters in the event of any provocation.