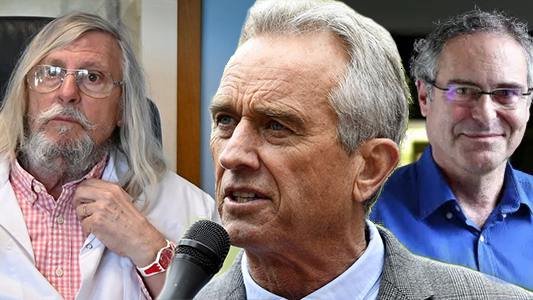 Professor Didier Raoult, Professor Christian Perrone and Robert F. Kennedy Jr were nominated as Honorary Guide for their contribution in bringing alternative perspectives to the alarmist discourse of the governments and media regarding COVID-19 and its alleged vaccines.

Didier Raoult , born on March 13 , 1952, in Dakar , Senegal , is a French microbiologist, specialist in infectious diseases , university professor – hospital practitioner at Aix-Marseille University and the University Hospitals of Marseille until his retirement in 2021, and director of the institute foundation Mediterranean Infection University Hospital (IHU).

Winner of the Inserm Grand Prix in 2010, he studied during his career and with his Marseille team, complex viruses and bacteria .

Raoult gained international media notoriety in 2020 when, at the start of the Covid-19 pandemic, he announced that a treatment based on hydroxychloroquine could solve the health crisis.

Christian Perronne , born on March 19, 1955 in Angers ( Maine-et-Loire ), is a French doctor and university professor-hospital practitioner . He specializes in tropical pathologies and emerging infectious diseases . He was chairman of the specialized “Transmissible diseases” commission of the High Council for Public Health .

He is known for his controversial positions on Lyme disease as well as his support for the treatment advocated by Professor Didier Raoult during the Covid-19 pandemic . Support the BonSens association created by Martine Wonner. In 2021, he multiplies the hidden truths about vaccines against Covid-19 and the evolution of the pandemic.

Robert Francis Kennedy Jr. (born January 17, 1954) is an American environmental lawyer and author known for promoting anti-vaccine information and education. Kennedy is a son of U.S. senator Robert F. Kennedy and a nephew of President John F. Kennedy. He helped found the non-profit environmental group Waterkeeper Alliance in 1999 and has served as the president of its board. Kennedy has co-hosted Ring of Fire, a nationally syndicated radio program, and written or edited ten books, including two New York Times bestsellers.

From 1986 until 2017, Kennedy was a senior attorney for the Natural Resources Defense Council (NRDC), a non-profit environmental organization. From 1984 until 2017, he was a board member and attorney for Hudson Riverkeeper. Earlier in his legal career, he served as assistant district attorney in New York City. For over thirty years, Kennedy was an adjunct professor of Environmental law at Pace University School of Law. Until August 2017, he held the post as supervising attorney and co-director of Pace Law School’s Environmental Litigation Clinic, which he founded in 1987.

Since 2005, he has promoted the idea that vaccines cause autism, and is founder and chairman of Children’s Health Defense, an anti-vaccine education group.