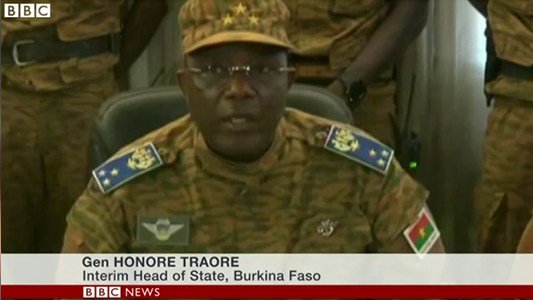 The first thing the top authority of Burkina Faso should do is ask Switzerland to block any bank account belonging to Blaise Compaoré as he may have received a huge amount of money from the ex colonial master, France, to favor French neo colonial interests.

Burkina Faso’s President Blaise Compaore has announced his resignation following violent protests over his attempt to extend his 27-year rule.

Mr Compaore issued a statement saying the presidency was now vacant and urging elections within 90 days.

Army chief Gen Honore Traore said he had taken over, but it was not clear if he had the backing of all the military.

Crowds danced and cheered in the capital, Ouagadougou, after Mr Compaore’s resignation was broadcast.

On Thursday, protesters angry at his attempt to amend the constitution set fire to parliament and government buildings.