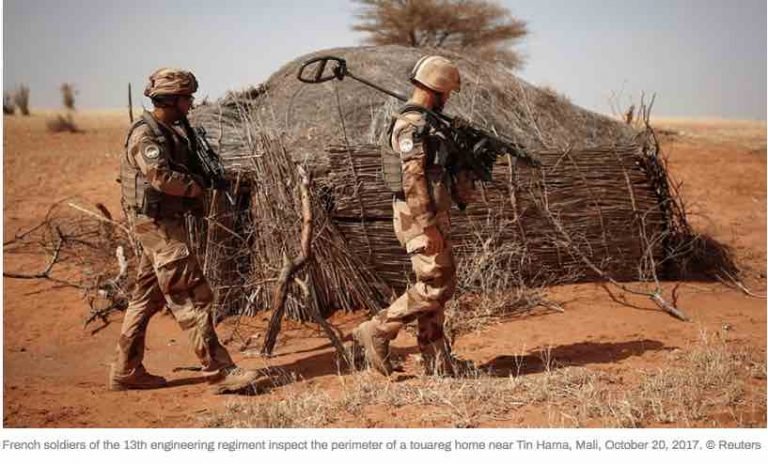 All French armies should immediately leave Africa. They are just neo colonialism tools to keep puppet leaders in place, which continue to pay the scandalous colonial taxes to France.

Up to 11 captive Malian soldiers were killed in a French military raid in Mali, its president said, refuting the claim they were jihadists. It comes days after the France’s Emmanuel Macron said African countries should “applaud” the French troops stationed there.

The jihadist group targeted in the operation was the first to report the results of the botched raid which took place on October 23. Out of 15 people killed in the raid, carried out by the French military, 11 turned out to be Malian soldiers captured by the militants. While the French General Staff dismissed the group’s account as “propaganda,” Mali has confirmed the operation was a tragic blunder.

Malian President Ibrahim Boubakar Keita on Sunday reiterated that “a lot of hostages” were killed in the operation, speaking to the Jeune Afrique magazine. While he did not mention the exact number of victims, the jihadists previously recorded footage with an “appeal” of eleven Malian army hostages said to have been killed in the raid.

“They were the terrorists’ hostages and there should be no ambiguity about that between our French friends and us,” Keita said. “It’s regrettable, it can unfortunately happen in these type of operations. We should admit it and not look for reasons that don’t exist.”

The Malian leader’s comments followed an evaluation of the incident by French Defense Minister Florence Parly, who insisted that her military had “very good reasons to believe” that the victims of the raid were not hostages.

“We have factual information indicating that they were not hostages. We’ve discussed that very frankly with the Malian authorities. I think I can say that this issue is behind us,” Parly stated in an interview with the Jeune Afrique magazine on November 16.

The controversy has raised many eyebrows, since the French have never openly admitted the blunder, despite retracting the initial claims about the operation being a “success” shortly after the incident. The Malian defense minister, the French ambassador to Mali and a representative of the anti-terrorism Operation Barkhane met to discuss the raid and its outcome at the end of October. The operation commenced in Africa’s Sahel region back in 2014, backed by a 4,000-strong permanent French contingent.

Following the meeting, a communiqué was issued by the Malian Defense Ministry on October 31, stating that “the Malian soldiers, detained by terrorists, have died.” The officials admitted mistakes during the staging of the raid as the reconnaissance “failed to detect the presence of the Malian military” and said that the French military admitted the blame for the incident.

“Learning from the tragedy, the both parties agreed to improve their communication in order to avoid such deplorable incidents in the future,” the document concluded. Despite these official revelations, the contradicting accounts of the events in Mali went through, fueled by the top officials of the two countries, with France publicly insisting the operation was a “success.”

President Macron has recently added fuel to the fire when talking about French troops stationed in the country’s former African colonies. During his last week’s visit to Burkina Faso, which is also part of the Operation Barkhane, Macron said that Africans owe “applause” to the French military stationed in their countries.

Macron delivered his comments while speaking in front of students at Ouagadougou University. A female student wondered why the number of French soldiers in her country surpassed the number of exchange students from Burkina Faso in France.

“Imagine that you are a young woman living in Angouleme, France,” Macron said, dodging the question. “She has never seen Ouagadougou. She may not even have heard of Ouagadougou. And her younger brother fighting alongside French troops died last month to save you. And you? You don’t have a younger brother who is currently fighting on Belgian or French soil.”