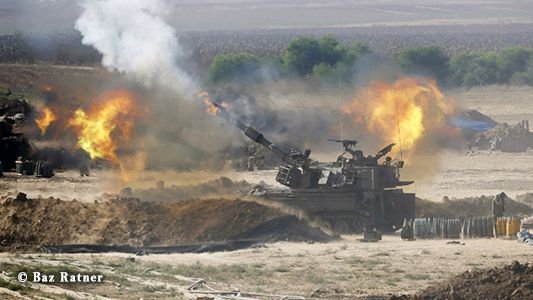 And the money goes to the weapons industry belonging mostly to American Jews, who make huge profits, and use part of it to lobby US politicians to make sure that they continue to provide financial aid to Israel, so they can buy more weapons and continue killing innocent civilians. The weapon industry vampires are making profits with the blood of Palestinian children in a continuous vicious circle: more bombing, more money, more money more lobbying, more lobbying more bombing…

No sooner than the White House condemned the shelling of a United Nations-operated school in Gaza on Wednesday did news break that the Pentagon will supply the Israeli military with new ammunition to further their campaign on the war-ravaged city.

That afternoon, CNN reported that the United States military will be honoring a request from Israel for assistance in the midst of their weeks-long campaign against militants from Hamas residing in Gaza City.

According to the network, Pentagon officials have confirmed that the US will honor a request from Israel for several types of ammunition, including 120mm mortar rounds and 40mm ammunition for grenade launchers. The exchange will not be an emergency sale, the unnamed officials said, and is coming from a stockpile of weapons maintained by the US in Israel worth more than $1 billion.