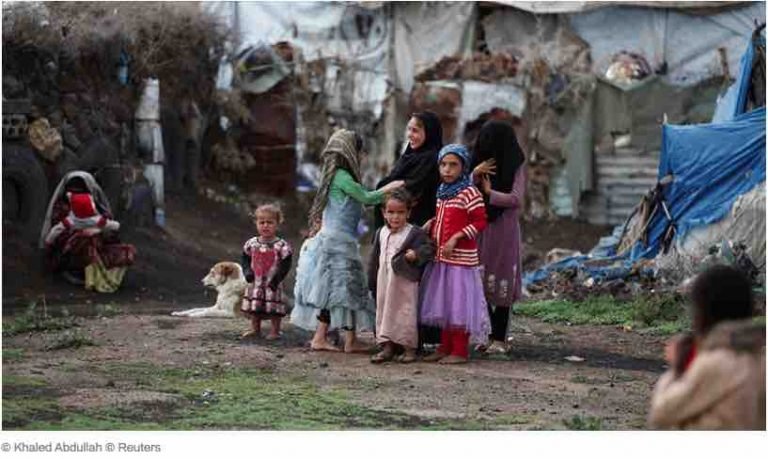 “The life of one human being is more important than all Humanity.” If Yemen had nuclear weapons, these 50 000 children would still be alive.

Two-and-a-half years of a lethal blockade and bombardment have produced almost nothing regarding territorial gains in the West’s Saudi-executed war against the Yemeni nation. The tightening of the blockade is an obscene, desperate attempt to put off its inevitable defeat.

The war against Yemen, sponsored by the West and executed by their ever-loyal Saudi fall guys, is going badly. Very badly.

When the Saudis began their bombardment of the Arab world’s poorest country, named ‘Decisive Storm,’ in March 2015, they promised a ‘limited’ mission. In reality, it has proved to be seemingly limitless and completely indecisive. A Harvard study estimates the Saudis are spending $200 million per day on this war, driving their military budget up to $63,7 billion, the fourth highest in the world. But they remain nowhere near achieving their stated goal of defeating the Houthi-led resistance and recapturing the capital, Sanaa. Indeed, Hadi, the ‘President’ the Saudis are supposedly supporting, is still holed up in Riyadh, apparently unable to set foot in his own country, such shows the depth of popular animosity toward him.

Meanwhile, the ‘coalition’ which Saudi Arabia purports to lead is falling apart. Qatar, the world’s richest country in terms of per capita income, who was supposed to bankroll a large chunk of the war – pulled out long ago; while the Pakistani parliament, whose allotted role was to provide the ground troops, unanimously vetoed the proposal last year. Meanwhile, in the south, the Emiratis are backing forces hostile to the very president the war purports to be defending.

Indeed, Hadi’s own troops are now complaining that the Saudis and Emiratis are actually bombing them. Yes, the ‘legitimate government’ of President Hadi, the one the whole operation is supposedly being fought in support of, is now itself being targeted by the aggressors, with Hadi accusing the Emirati crown prince of acting like an occupier. Tawakkol Karman, a Nobel Peace Prize-winning activist, even suggested that “the Saudi-led air strikes have killed more fighters of the national army than Houthis.”

Furthermore, the war has massively expanded Al-Qaeda’s base in the country and provided a new one for ISIS. While this is not an immediate problem for Saudi Arabia in itself – after all, the more sectarian forces come to the fore, the less likely Yemen will be able to unite and pose a threat to Al Saud – but is nevertheless a real potential danger for the future, should those forces decide to turn their experience and weaponry on the kingdom itself. The Saudis seem to be, belatedly, recognizing this, recently branding as ‘Al-Qaeda terrorists’ one of the biggest Salafi groups in the country, the Abu Abbas brigade – after years of arming its men.

Indeed, the war is going so badly that even the Saudis themselves are now privately saying they want out. Leaked emails last August revealed that Crown Prince Mohammed bin Salman – who as defense minister was responsible for initiating the war in March 2015 – is keen to end the war. Yet still, the war continues. London-based Yemeni Safa al-Shami told me that “the Saudis are in trouble; they don’t want [the war] to continue anymore. But they are being told ‘you have to finish the mission to the end.’” By this analysis, far from ‘turning a blind eye’ to a ‘Saudi war,’ the West is positively demanding that a reluctant Saudi Arabia continues its futile and murderous campaign.