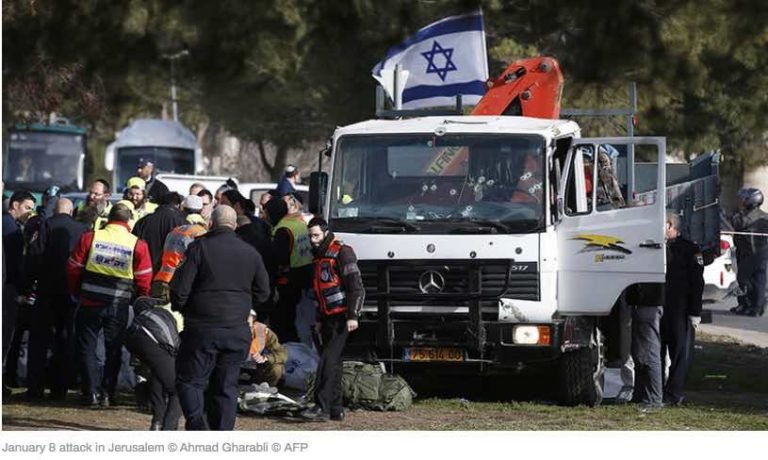 In this case, all Palestinian families who had relatives killed by Israeli attacks should also claim similar compensation. That would be a huge amount of money after the Gaza genocide!

Israel has filed a lawsuit against the widow and children of a Palestinian man, who killed four IDF soldiers in a truck-ramming attack, demanding compensation of 2 million shekels ($572,000) for each victim, in what authorities say will be a permanent new anti-terrorism tactic.

Proceedings were opened by The District Prosecutor’s Office in Jerusalem, in conjunction with the Defense Ministry, against the estate of Fadi Al-Qanbar, who was shot dead after his January attack, in which thirteen people were also injured.

“This lawsuit, which stems from a terrorist incident in which soldiers were murdered, is designed to recover the expenses incurred in events of this kind to the state’s coffers, as well as sending a clear message that the state will also settle accounts on a civil level with the perpetrators of hostile acts,” read a statement from the District Prosecutor’s office, as cited by Haaretz.

The widow of Al-Qanbar, who was an Israeli citizen, and his four children, aged between 1 and 8, are the defendants.

“In light of the fact that the terrorist caused the damage, his legal heirs are the ones who need to bear it and indemnify the state for it,” claims the lawsuit.

The overall demanded sum of $2.3 million includes burial expenses, compensation to the families for the dead soldiers’ loss of earnings and payback for “the pain and suffering reflected in the cruelty of the acts, and the major suffering of each of those murdered.”

Israel says it is leaning on existing 1950 and 1959 military casualty and disability legislation in its case. The prosecutors told Haaretz that further similar lawsuits are in the pipeline.

The high-profile attack, which was praised by Hamas, but condemned by the UN, EU and the US, marked a watershed, with Interior Minister Arye Dery promising “a new era in the battle against terrorism.”

“From now on, anyone who plots, plans or considers carrying out a terrorist attack will know that his family will pay a heavy price for his deed,” he said in January.

The compensation claim comes on top of more established reprisal tactics intended as retribution and as an disincentive for those considering engaging in similar acts.

In the aftermath of the Jerusalem attack, Al-Qanbar’s family home in the east of the city was sealed-off – such houses are then often demolished – and 12 of his relatives, including his mother, lost their Israeli residence permits.

The Hamoked Center for the Defence of the Individual, an NGO that aids Palestinians, and is providing support to Al-Qanbar’s family, called the lawsuit “vindictive and ugly.”

“The Al-Qanbar family is experiencing a revenge campaign by the establishment after the terrorist attack carried out by a relative,” said its director, Dalia Kerstein “Now a damages suit has been filed against the widow and four fatherless children of the perpetrator of the terrorist attack, claiming they are obligated to indemnify the state for damages and expenses due to this attack, which is in fact legal but is completely vicious, vindictive and ugly.”