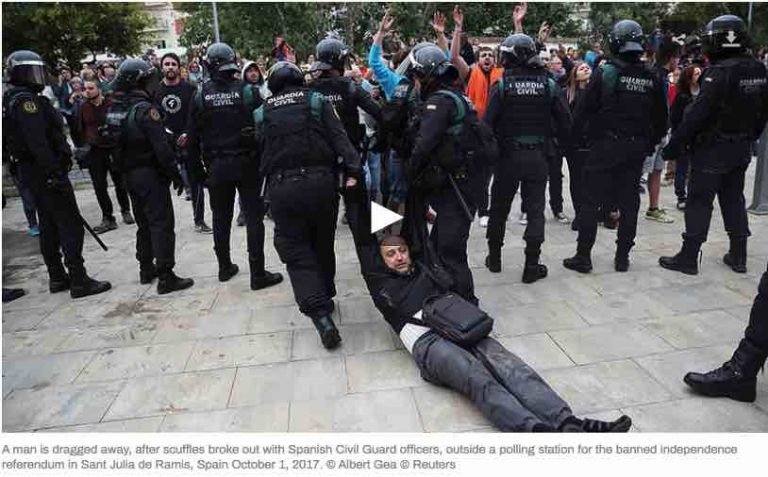 He is absolutely right. The right to secession is one of the most important parts of the Human rights declaration that the United Nations is supposed to enforce.

The WikiLeaks founder has urged the European Commission president to strip Madrid of the rights of an EU member state, as it proceeds with a violent clampdown to prevent the independence vote in Catalonia. Assange says this violates the union’s values.

“Dear @JunckerEU. Is this ‘respect for human dignity, freedom and democracy’?” Julian Assange mockingly inquires of Jean-Claude Juncker in a tweet, accompanied by a video footage of Spanish law enforcement agents forcibly dragging voters out of a polling station, knocking people off the steps at the entrance.

“Activate article 7 and suspend Spain from the European Union for its clear violation of Article 2,” Assange urged the European Commission leader, with links to the paragraphs attached to the post.

Article 2 describes values on which the Union was founded and are common to all its member states, with respect for human dignity, freedom, democracy, equality, the rule of law and respect for human rights, as well as the rights of minorities, among them. Under Article 7, a state breaching these values can be deprived of certain rights, such as voting rights in the European Council.

The same video has been shared by Jordi Cuixart, head of the Omnium cultural center, which promotes Catalan language and culture. Cuixart also referred to article 7, appealing to the Spanish Prime Minister Mariano Rajoy to note the part about “suspension of a member state which uses the military against the population.”

In September, Rajoy said the central government was set to respond to the Catalan plebiscite “with reason, moderation and proportionality,” with the head of the region’s police Josep Lluis Trapero later voicing similar assurances.

The Catalan leader Carles Puigdemont has already hit out at authorities in Madrid for using “unjustified, disproportionate and irresponsible” violence, as Catalans thronged to the polling centers across the region despite thousands of police officers trying to prevent the referendum, declared illegal by Spanish courts.

In some places security forces have burst into polling centers, even chopping their way through with axes, in an effort to seize voting materials, with voters blocking the entrances and staging sit-in protests.

“It is against the constitution, it is against human rights, it is also against the interests of Catalonia, Spain and Europe…” says one of the international observers at the referendum, Greek MEP Stelios Kouloglou, who spoke with RT.

“I think the European Union, must interfere, not taking sides in favor of ‘si’ or ‘no’ in the referendum, but to mediate to start a dialogue,” he said, stressing that people are being injured during the electoral process in Europe for the first time. Kouloglou added that by using such tactics Madrid has “cut all the bridges with Catalonia,” posing “a blow to the unity of Spain.”

When asked why no condemnation of the crackdown has come from the neighboring countries in the EU or humanitarian organizations, Kouloglou referred to double standards. “We want a Europe with equal standards for everybody and also a Europe that respects democracy regardless of whether violations are taking place in Venezuela, Russia or Spain.”