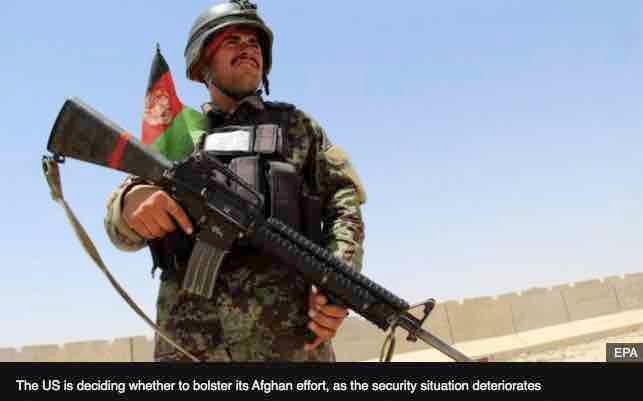 “…in a land where every child is raised with a spirit of vengeance”. And that’s true in every country invaded and occupied by the US or NATO countries: that’s the very factory of future terrorists in a “vendetta spirit” that is common in all Mediterranean and Arabic culture, where for many generations, it’s a matter of family honor to avenge their killed ancestors. Western countries are sawing a hatred that will be there for centuries. As soon as western armies evacuate, this will end.

As the White House mulls its next move in conflict-hit Afghanistan, the Taliban offer their advice in an open letter to the US president.

Donald Trump is, as the world knows, happy to talk about all sorts of things, but one area where he has maintained his silence is American policy in Afghanistan.

His military advisers concede that America’s longest-ever war has reached a stalemate and have advised that he increase troop numbers to break it.

In the past, Mr Trump has hinted that his instinct is to cut America’s losses and begin to pull back from the conflict. Meanwhile, the world awaits a decision.

We were told the White House would make its call by mid-July, but there has been silence. Then last week, Mr Trump announced he was “getting very close” to deciding on a strategy.

“I took over a mess,” the US president acknowledged, “and we’re going to make it a whole lot less messy.”

He has now got some advice from an unexpected quarter – the Taliban. The hard-line Islamic group tagged him on his medium of choice, Twitter, urging him to heed their thoughts on this fraught issue.

“We have noticed that you have understood the errors of your predecessors,” says the official press release from the insurgent organisation, “and have resolved to thoroughly rethink your new strategy in Afghanistan”.

It warns him not to listen to what it calls the “warmongering congressmen and generals”, and not to “protract the war”. Not surprisingly, the Taliban’s advice is that the wise solution would be “a complete withdrawal”.

“On the one hand, this strategy will truly deliver American troops from harm’s way,” the insurgents explain, “and on the other, it will bring to an end an inherited war by rectifying the mistakes of former American officials”.

The 16-year US military presence had made Afghanistan less stable and more corrupt, the Taliban added.