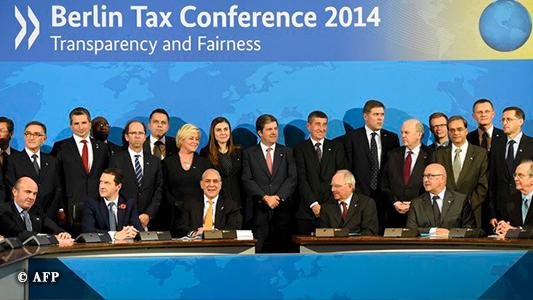 This is a totally useless measure. The only people who need transparency on their assets, the 1% of 1 % richest, are moving (and already moved for most of them) their residencies in countries where there is no income or capital taxes, evading any problem, and escaping this agreement which specifies that only residents of the signatory countries are involved.

Finance ministers from over 51 countries signed an agreement in a step closer to ending the dark financial underworld of tax-evasion and money-laundering. Another 30 countries pledged to join by 2018.

The deal is called the Multilateral Competent Authority Agreement and will look to build a collective exchange of bank accounts, taxes, assets, and income held outside local tax jurisdictions.

The two-day summit was organized by the Organization for Economic Cooperation and Development (OECD) and the Global Forum on Transparency and Exchange of Information for Tax Purposes. It was hosted by German Finance Minister Wolfgang Schauble and held in Berlin.

"Banking secrecy, in its old form, is obsolete," German Finance Minister Wolfgang Schaeuble said in an interview in Bild on Wednesday.

RAEL'S COMMENT: Better not come to the Seminar rather than accept test or vaccine. Your health is more important. Let's hope that they stop these …

RAEL'S COMMENT: Just saw this movie which show the Dahomey women warriors defeating the European colonizers and slavers. A must see !

'Black Bitch’ pub to be renamed

RAEL'S COMMENT: When the politically correct distorts the real meaning of words.