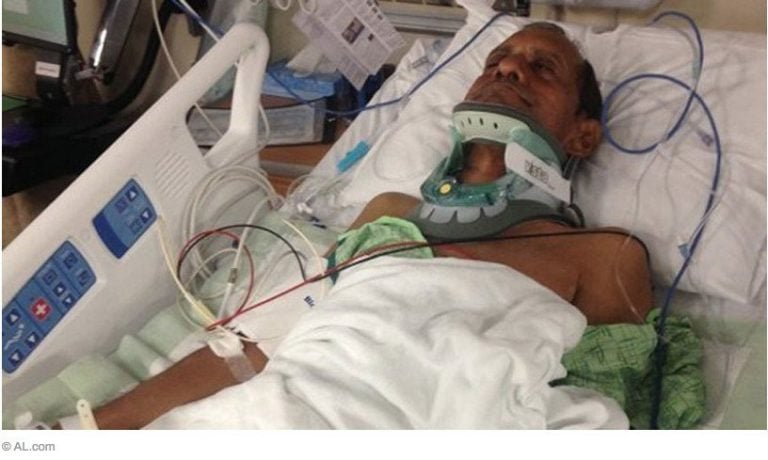 Parker "will return from administrative leave today and will be assigned to the MPD Training Unit until he completes his required re-certifications,"wrote Major Jim Cooke, acting chief of the Madison Police Department (MPD), in a letter posted on Facebook. "After his training is complete, he will receive his duty assignment."

Following a federal judge's acquittal of Parker — who was charged with violating Indian citizen Sureshbhai Patel's civil rights after throwing Patel to the ground and partially paralyzing him during a sidewalk stop last year — "and the dismissal by the Attorney General of the misdemeanor charges against him" in May, Cooke wrote, "I have extensively reviewed all of the documentation regarding the case, and I have made the factual determination that Officer Parker’s actions in February 2015 did not amount to a policy violation."

Cooke cited US District Court Judge Madeline H. Haikala, who wrote in January after Parker's second mistrial that the officer was justified in his use of force given Patel, who does not speak English, resisted a a pat-down search.

"Parker complied with MPD policy regarding preliminary investigations of suspicious individuals and MPD’s ‘Response to Resistance’ policy…Officer Parker made a split-second decision in a rapidly evolving situation rather than a premeditated decision to use violent force," Haikala wrote in 92-page opinion in which the judge said a third trial was unlikely to end differently than Parker's previous trials.

Cooke said Haikala's "opinion is an in-depth treatment of the law and its application to Officer Parker’s actions and I believe it will offer clarity to those who currently do not understand the decision I have made."

On February 6, 2015, a neighbor of Patel's son, who lived in the affluent Huntsville suburb of Madison, called police to report a "skinny black guy" who was "just kind of walking around close to the garage." Police, including Parker, approached the senior Patel on the sidewalk seeking to understand what he was doing. Patel only speaks Gujarati and some Hindi.

“No English. Indian. Walking,” he said, according to his son Chirag’s statement to the local media at the time. Dashcam footage of the incident later released by police shows that Patel could not answer the officer's questions, contributing to the tense encounter. Parker is on record telling his supervisor during the incident that Patel "can't speak a bit of English."

Once he mildly resisted officer attempts to search him, Patel was slammed to the ground by Parker, leaving Patel unable to walk or grip with his hands, according to testimony by a neurosurgeon who operated on the Indian national. A metal cylinder and plate replaced one vertebra in Patel's neck, Dr. Cheng Tao of Huntsville Hospital told jurors. Patel is not expected to fully recover from the injuries, his lawyer has said.

Parker, 27 at the time of the incident, maintained during both trials that he lost his balance during the takedown of Patel, and that Patel had jerked away from him, allegedly leading Parker to believe "that [Patel] was going for that weapon I presumed he had," he testified in court, according to AL.com.

The dashboard video of the encounter was not enough to conclusively prove what happened, Judge Haikala wrote in January.

"For all of the Government’s diligent efforts to enhance the dashcam video, the enhanced video fails to capture critical pieces of evidence. The video does not show whether Mr. Patel placed his hands in his pockets as he walked away from Officers Parker and Slaughter."

Patel has filed a federal lawsuit against Parker and the city of Madison. Patel's attorney told NBC News that the police department's efforts to reinstate Parker to active duty are "both shocking and disappointing."

"Apparently, Parker is not an 'exception to the rule,' and the city's decision shows Parker's brutal assault of Patel was simply business as usual for its police department," said Hank Sherrod.

The pending lawsuit alleges that the city failed to properly train police officers and sufficiently maintain department policies that could have resulted in a less tense and violent police stop. Sherrod said the decision to reinstate Parker strengthens the lawsuit's claims against the city.

"They're basically saying Parker acted as we've trained him to act," Sherrod said.

At the time of the incident, doctors said that without emergency surgery, Patel would have been permanently paralyzed, Chirag Patel told AL.com.

Patel’s injuries elicited a strong protest from the Indian government, prompting Alabama governor Robert Bentley to apologize for the “unfortunate use of excessive force.”

“We are extremely disturbed,” spokesman for India’s foreign ministry Syed Akbaruddin said at a briefing in February. “This is a matter of concern for us; and India and the US ‒ as open, pluralist societies ‒ need to address these issues and find ways in a mature manner so that these are aberrations, and are not the norm.”

Madison is a town of about 46,000 people in northern Alabama, 10 miles west of Huntsville, and is known for having a strong presence in the high-tech, aerospace, and defense industries.

RAEL'S COMMENT: More trees! Who was talking about deforestation ?