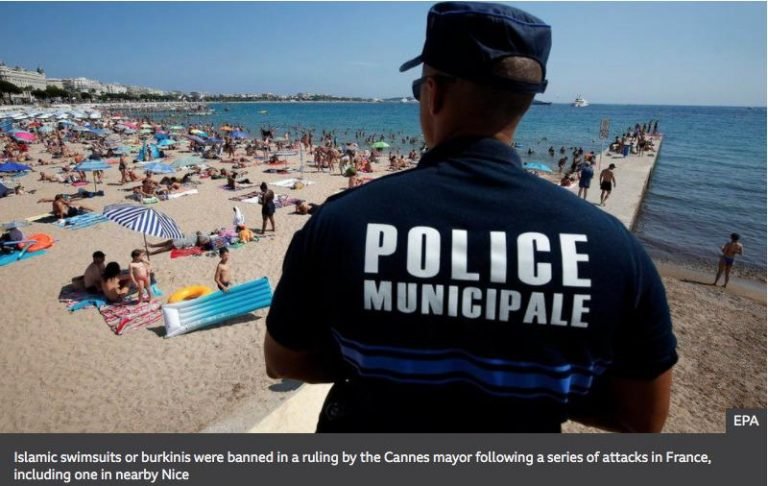 Boycott tourism in France as long as, like in Iran, there is clothing police.

A Muslim Frenchwoman says she was fined and faced racial abuse for wearing a hair-covering veil on a Cannes beach.

The woman, a Toulouse native named only as Siam, was strolling on the beach while on holiday with her two children.

She said she was told by three police officers that her clothing was "not correct". Meanwhile, she says, a crowd gathered, some shouting: "Go home!"

The Cannes mayor earlier this month banned full-body swimsuits known as "burkinis" from the beach.

David Lisnard said they were a "symbol of Islamic extremism" and might spark scuffles, as France is the target of Islamist attacks.

The working of his ruling suggests it could be applied to any "beachwear which ostentatiously displays religious affiliation".

'Dipping my feet'
In this case, Siam, 34, says she was wearing not a burkini but a hijab covering only her hair, along with leggings and a tunic.

"I wasn't intending on bathing, just dipping my feet in the water," Siam told L'Obs news website (in French).

Approached by the police officers, Siam says they asked her whether she was aware of the order in force in Cannes, and she said she had not followed it closely.

She says she was then told that beach users had to wear "proper dress". The officers suggested she could remain on the beach if she rearranged her scarf as a headband around the head.

Siam says that by this point a crowd had gathered, and although some defended her, others began applauding the police, telling her to "go home" and saying "Here, we are Catholic!"

This account was confirmed by a journalist who also came across the scene.

"Racist speech was completely unleashed," Siam said. "I was stunned."

"Because of people who have nothing to do with my religion have killed, I no longer have the right to go to the beach!"

Siam said she thought hard before going public about the incident, which happened on 16 August, but "could not let it go in our country".

"Today we are forbidden from the beach. Tomorrow, the street?"

Approached for comment by AFP news agency, Mayor Lisnard insisted women wearing a "simple veil" should not be booked by police, but said he had no reason to believe the fine had been imposed improperly.

"If this woman believes she has been unjustly booked, which unfortunately can still happen, she must contest it," he said.

RAEL'S COMMENT: “WEF is increasingly becoming an unelected world government that the people never asked for and don’t want,” billionaire Elon Musk commented on the …