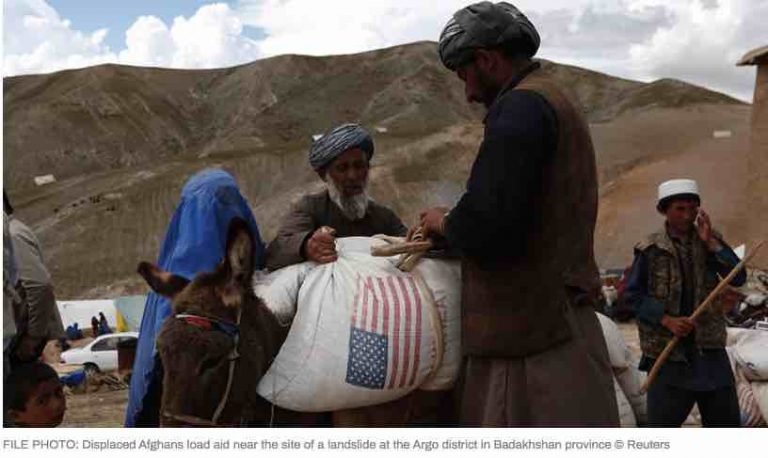 This is nothing compared to the 140 billion in aid given to Israel since 1973. The USA gives every day 10 million $ to Israel and 0 $ to Palestine…

Donald Trump tweeted that the US “foolishly spent” $7 trillion in the Middle East, urging for money to be invested in rebuilding his own country.

Trump’s Twitter statement published on Friday initially focused on economic issues, but eventually took aim at the US policy in the Middle East. “At some point, and for the good of the country, I predict we will start working with the Democrats in a Bipartisan fashion.”

“Infrastructure would be a perfect place to start,” the tycoon-turned-president tweeted, adding: “After having foolishly spent $7 trillion in the Middle East, it is time to start rebuilding our country!”

The tweet came a day after 128 UN members supported a General Assembly resolution which condemned the Trump administration’s recognition of Jerusalem as Israeli capital. The vote took place during a rare UN General Assembly emergency session, convened at the request of Arab and Muslim states.

“Well, we’re watching those votes. Let them vote against us, we’ll save a lot. We don’t care.”

US military ventures in the Middle East over just the last decade and a half have indeed cost Washington a pretty sum. Even though the Pentagon said in June that it had spent only $1.5 trillion on war-related costs since September 11, 2001, the real figures could be much higher.

According to a report prepared by the Congressional Research Service back in 2014, the costs of the US war on terror already amounted to at least $1.6 trillion at that time. Later, a 2016 Brown University study put the costs of US wars in Iraq, Afghanistan, Pakistan, and Syria at about $3.6 trillion over the period between 2001 and 2016, adding that they would likely reach $4.79 trillion by the end of 2017.

A 2013 Harvard University working paper said that the cost of just two US wars – in Iraq and Afghanistan – could eventually amount to between $4 and 6 trillion, including long-term medical care and disability compensation for service members, veterans and families, military replenishment, and social and economic expenses.

Bonnie Kristian, a fellow at the Washington-based Defense Priorities think tank put the total costs of the US wars in Iraq and Afghanistan, including the “relevant legacy costs,” at $5 trillion. In her article published by Forbes magazine, she also predicted that this already hefty bill would grow to $12 trillion by 2053 even if the US is “done in Iraq and Afghanistan by the end of 2017,” as it includes healthcare commitments to US veterans and “interest on the debt incurred by these wars.”

And that does not include the costs of other US military endeavors, such as the 2011 intervention in Libya or overseas operations in countries such as Pakistan, Somalia, or Yemen. Apart from that, since 2001, the US has also spent $164.3 billion worth of aid to Iraq and Afghanistan, according to USAID.