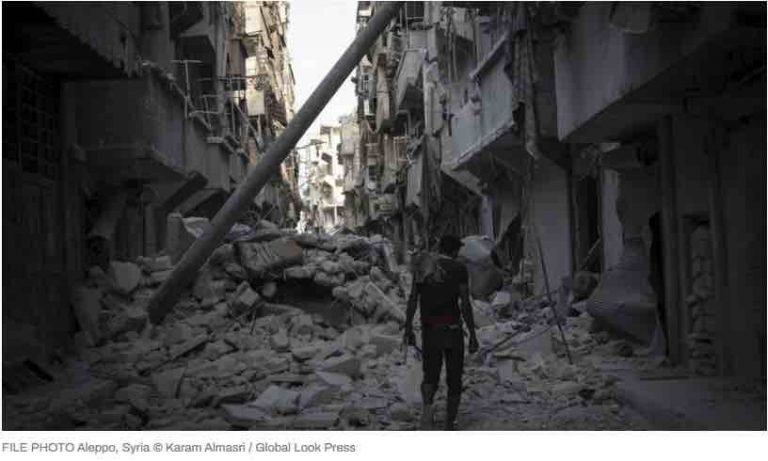 Absolutely! As well as in Serbia, Afghanistan, Iraq, Libya, etc…

With Syria’s nearly seven-year war now virtually over, the process of rebuilding the devastated country comes to the fore, with the financial cost of that effort put at $200 billion. Who pays for it?

When you view the ruins of Aleppo alone, Syria’s second biggest city, plus the carnage across the entire country, from towns, villages, bridges, roads, public utilities, hospitals, schools, and so on, the real figure for reconstruction could be far higher than $200 billion.

Then there is the inestimable cost of human suffering and families decimated. All told, the reparations could amount to trillions of dollars.

Syria’s war was no ordinary civil war, as Western mainstream media tended to mendaciously depict it.

From the outset, the conflict was one of an externally driven covert war for regime change against the government of President Bashar Assad. The Arab Spring unrest of 2011 provided a convenient cover for the Western plot to subvert Syria.

The United States and its NATO allies, Britain, France, and Turkey, were the main driving forces behind the war in Syria, which resulted in up to 400,000 deaths and millions of citizens displaced from their homes. Other key regional players sponsoring the campaign against the Syrian government were Saudi Arabia, Qatar, and Israel.

Most of the militants who fought in Syria to overthrow the state authorities were not Syrian nationals. Self-styled jihadists from dozens of countries around the world made their way to Syria, where they were funded, armed and directed by covert forces from Western and Arab states.

The barbarian-like gravitation to Syria indicates the degree to which the effort to overthrow the Syrian government was orchestrated by foreign powers.