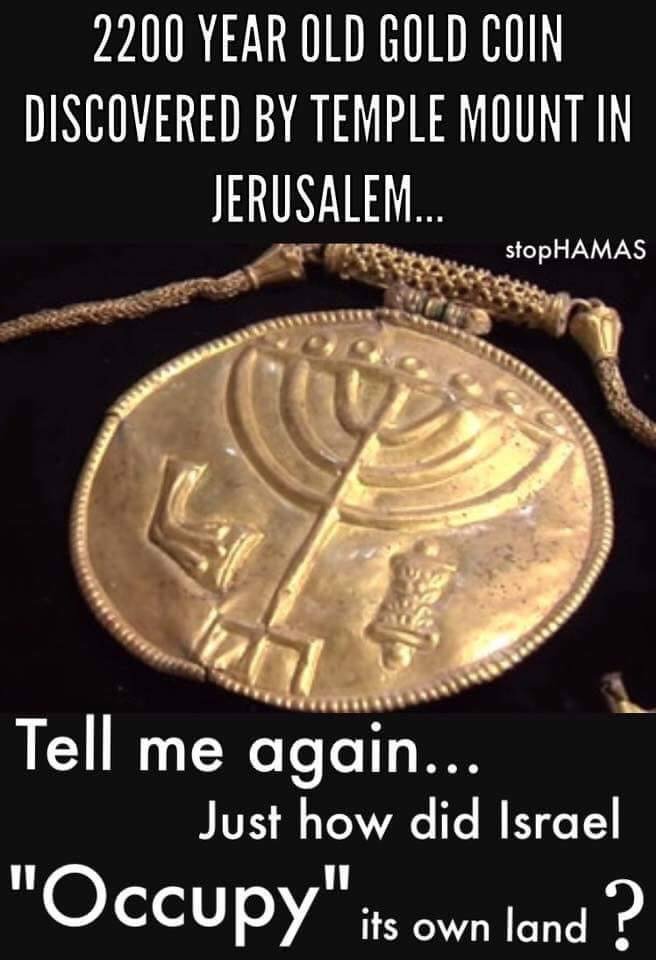 So the 2000 years old Roman medals found under London give Italy the right to invade, occupy England and commit genocide against British people? And one must remember that REAL Jews lived peacefully in Palestine for 2000 years with Palestinian people until the Khazar invasion and stealing of houses and lands. This medal comes probably from one of them. Not immigrants colonizers from eastern Europe…

Archaeologists have uncovered a 1,400-year-old hoard of gold coins and jewelry — plus a medallion marked with Jewish religious symbols — at the foot of Jerusalem’s Temple Mount, a holy site for three world religions.

“This happens only once in a lifetime,” said lead archaeologist Eilat Mazar of the Hebrew University of Jerusalem.

The 4-inch-wide (10-centimeter-wide) medallion is the chief prize: Etched into the golden surface are images of a seven-branched menorah, a ram’s horn and a Torah scroll. Thirty-six coins, along with pieces of gold and silver jewelry, also were found at a site just 50 yards (meters) from the southern wall of the Temple Mount, revered by Muslims as Haram al-Sharif.

The treasures were discovered this spring, just a few days after Mazar and her team began a new phase of excavations, and unveiled during a news conference on Monday.

Different eras
A couple of months ago, Mazar announced a significant discovery involving an inscription on a ceramic fragment that goes back to 1000 B.C., the era of Kings David and Solomon. The newly revealed find, dubbed the “Ophel Treasure,” dates to a more recent era in Jerusalem’s history.

The artifacts were buried in two places amid the ruins of a public structure from the late Byzantine era, around the year 600. The medallion was found buried in a small depression of the structure’s floor, along with a smaller medallion, two pendants, a gold coil and a silver clasp. All of those items are thought to have been ornaments for a Torah scroll.

The coins were found in a different location. “The 36 gold coins can be dated to the reigns of different Byzantine emperors, ranging from the middle of the fourth century CE to the early seventh century CE,” said Lior Sandberg, a coin specialist at the Hebrew University’s Institute of Archaeology.

Along with the coins, the archaeologists found a pair of large gold earrings, a gold-plated silver hexagonal prism and a silver ingot. Remnants of fabric were mixed in with the treasures, suggesting that the items were once held in a cloth purse.

Putting the pieces together
Mazar and her colleagues assembled the pieces of the archaeological puzzle into a story that explained why the treasures were left behind: They surmised that they were abandoned in the wake of the Persian conquest of Jerusalem in the year 614. After the Persians defeated Jerusalem’s Byzantine Christian rulers, many Jews returned to the city and expected to live with more religious freedom. But during the 15 years that followed, Persian power waned, the Byzantine Christians regained influence — and Jerusalem’s Jews were expelled.

Mazar said the Jews who hid the Torah ornaments and other riches were probably victims of the political reversals.

“It would appear that the most likely explanation is that the Ophel cache was earmarked as a contribution toward the building of a new synagogue, at a location that is near the Temple Mount,” Mazar said. “What is certain is that their mission, whatever it was, was unsuccessful. The treasure was abandoned, and its owners could never return to collect it.”