4 million Muslims killed in Western wars: should we call it genocide? 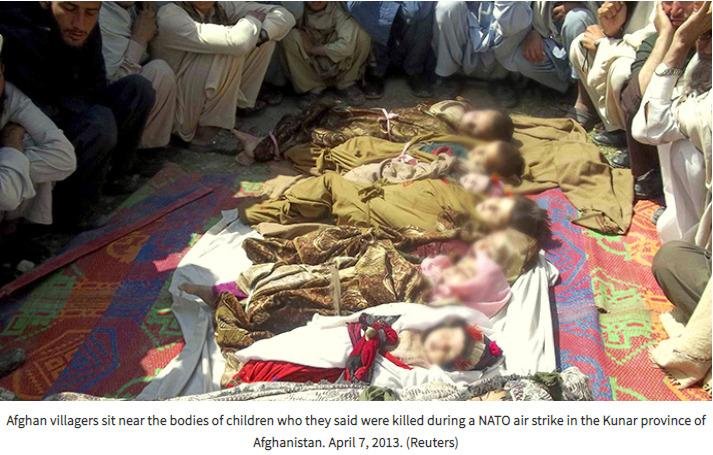 Yes, it is a genocide. And families relatives, of course, try to find revenge through “terrorism”.

Hearkening back to the Japanese interment camps of WWII, some Americans are now calling for Muslims to be placed in camps or even openly calling for genocide against the 1.6 billion practitioners of the faith.

It may never be possible to know the true death toll of the modern Western wars on the Middle East, but that figure could be 4 million or higher. Since the vast majority of those killed were of Arab descent, and mostly Muslim, when would it be fair to accuse the United States and its allies of genocide?

A March report by Physicians for Social Responsibility calculates the body count of the Iraq War at around 1.3 million, and possibly as many as 2 million. However, the numbers of those killed in Middle Eastern wars could be much higher. In April, investigative journalist Nafeez Ahmed argued that the actual death toll could reach as high as 4 million if one includes not just those killed in the wars in Iraq and Afghanistan, but also the victims of the sanctions against Iraq, which left about 1.7 million more dead, half of them children, according to figures from the United Nations.

Raphael Lemkin and the definition of genocide
The term “genocide” did not exist prior to 1943, when it was coined by a Polish-Jewish lawyer named Raphael Lemkin. Lemkin created the word by combining the Greek root “geno,” which means people or tribe, with “-cide,” derived from the Latin word for killing.

The Nuremberg trials, in which top Nazi officials were prosecuted for crimes against humanity, began in 1945 and were based around Lemkin’s idea of genocide. By the following year, it was becoming international law, according to United to End Genocide:

“In 1946, the United Nations General Assembly adopted a resolution that ‘affirmed’ that genocide was a crime under international law, but did not provide a legal definition of the crime.”

With support from representatives of the U.S., Lemkin presented the first draft of the Convention on the Prevention and Punishment of Genocide to the United Nations. The General Assembly adopted the convention in 1948, although it would take three more years for enough countries to sign the convention, allowing it to be ratified.

According to this convention, genocide is defined as:

“…any of the following acts committed with intent to destroy, in whole or in part, a national, ethnical, racial or religious group, such as:

4 Million Muslims Killed In Western Wars: Should We Call It Genocide?