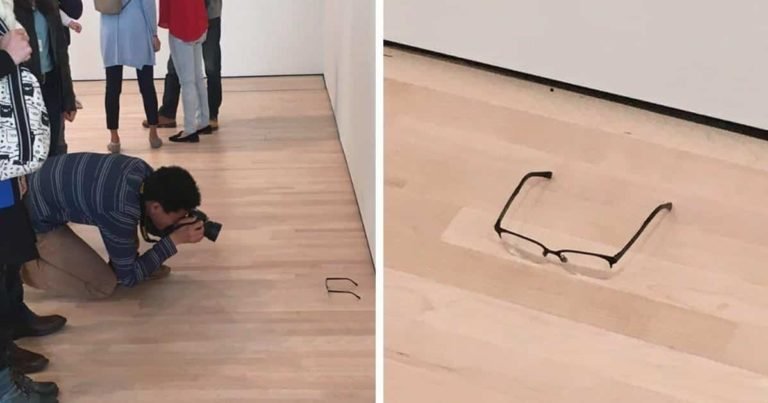 The morning laugh… These “modern art” snobby people are so ridiculous…

Several visitors to the San Francisco Museum of Modern Art this week were fooled into thinking a pair of glasses set on the floor by a 17-year-old prankster was a postmodern masterpiece.

“Upon first arrival we were quite impressed with the artwork and paintings presented in the huge facility,” TJ Khayatan told BuzzFeed. “However, some of the ‘art’ wasn’t very surprising to some of us.”

“We stumbled upon a stuffed animal on a gray blanket and questioned if this was really impressive to some of the nearby people.”

To test out the theory that people will stare at, and try and artistically interpret, anything if it’s in a gallery setting, Khayatan set a pair of glasses down and walked away.

Soon, people began to surround them, maintaining a safe distance from the ‘artwork’ and several of them taking pictures.

I like to think they imagined the floored glasses to represent the dumbing down of culture, or perhaps the viewing of life through a lens, possibly with a nice, lower-case title like ‘myopia’ or ‘real eyes (real lies)’.

The teen tweeted the moment on 24 May and it’s already attracted over 45,000 retweets, ironically making the whole event a sort of modern art piece itself.

Khayatan previously had similar success with a baseball cap and a bin.

The stunt brings to mind a similar one in 2014 which saw restaurant critics unknowingly served McDonald’s.

Khayatan was quick to defend modern art though.

“I can agree that modern art can be a joke sometimes, but art is a way to express our own creativity,” he added.

“Some may interpret it as a joke, some might find great spiritual meaning in it. At the end of the day, I see it as a pleasure for open-minded people and imaginative minds.”