‘American exceptionalism as Rorschach test: Means anything you want it to’ 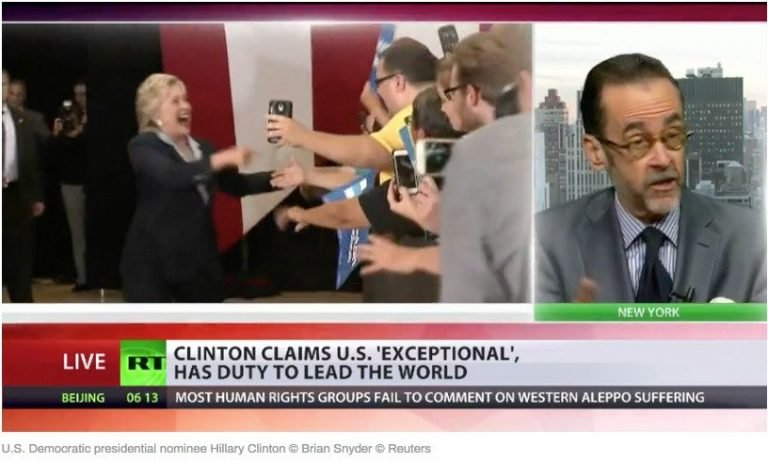 Yes! And the USA is 5% of the world population, never forget that. It’s a dwarf pretending to be a giant.

Hillary Clinton’s take on American exceptionalism has the “intellectual nutritional value of junk food,” according to media and political analyst Lionel, who believes the majority of the population don’t have the slightest clue what the term even connotes.

RT: Inside the US there’s a fundamental principle of law which is everybody equal based on sex, or race or anything else. But outside of the country, according to Hillary Clinton, there’s no equality and the US is exceptional or, basically better than everybody else. Isn’t it fundamentally and grossly hypocritical?

Lionel: Well, you know, hypocritical in whose eyes? We have this wonderful idea that America is the cornerstone of liberty and freedom. Notwithstanding the fact that our first Constitution had the Fugitive Slave Clause, which provided that you had to give slaves back to their owner if they ran away. Details, details. Then we’ve had the Thirteenth Amendment, which we’ve had to pass to abolish slavery. Women were not allowed to vote until the Nineteenth Amendment. Blacks and whites could be actually penalized, could be charged with the felony if they were caught in “miscegenation.”

So the term “American exceptionalism,” I’m sorry, I beg to differ. Most people don’t have the slightest clue what that even connotes. It’s a nice start: Exceptional. Sometimes exceptional is not good, it’s like the word “special.” It depends on how it’s used.

But here’s the problem: We talk about American exceptionalism – that we’re a great country, based on a one nation theory. That’s terrific. Or that we are a country that espouses equality and here go justice and the law. That’s great.

The problem though, when we start talking about being “superior,” not so much that we feel better than, but when you have ideology espoused especially by some of the neo-conservative factions that say: “Not only we’re superior, but we want to go and spread this superiority, this freedom. We’re about to go and spread this,” – now that’s when we get a little dangerous here.

And what’s interesting if you go back and watch the first debates, cause we love talking about debates now, between George Bush and Al Gore (who basically got more votes but lost, but that’s another story), George W. Bush said: “Our goal is not to go and tell people what to do, follow our ways.” And I watched this recently and I was thinking: “Wow. Who is that? That looks like George Bush, sounds like George Bush, but that’s not the policy that the Bush administration espoused.”

So, American exceptionalism is like a Rorschach test; it’s anything you want it to be. And when you read this particular piece, written by Hillary Clinton (and I assume it was written by her; I would never suspect somebody wrote it and that she merely signed her name to it). But what this is, it’s basically, well, shall we say it’s calorie dense, but as far as the intellectual and factual nutrients go I’m not so sure. It might pass as literally junk food.

So what we need to do is to put this into perspective. I believe we have a great country, I believe we are great people, but sometimes we inadvertently use terms and use phrases which over a period of time could have lose their intrinsic value. And that ‘one size fits all’ kind of a ‘feel good’ type of situation. I hope it cleared that up perfectly.

RT: It has to an extent. Does the US have the right to claim that it is above of it as it is exceptional?

L: Oh, what we can, there’s no law against it. I think it is OK for certain people to feel proud. Look, you want to talk about another term that is interesting – ‘exceptionalism’. I can tell some people can say: “Ouuu, I don’t like the sound of that.”

So when you say “national exceptionalism” I’m telling you right now, with all due respect. Not you, of course, but the others – don’t read too much into this, because this phrase has been used for so long, that we’ve kind of habituated to it.

And there’s a certain basis that we have. Where people almost say “Yes, American exceptionalism, a shining city on the hill. Yes, that’s OK.” And if we really go into that, wait a minute – exceptional how? We’re 240-years-old. And that’s wonderful, but sometimes we have to realize that there’re other countries that are pretty darn gone good too, and in their own way feel exceptional and, dare I say it, in some cases, superior.